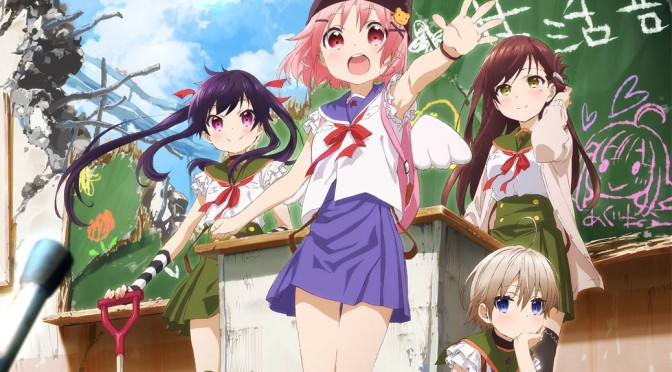 Higurashi: When They Cry

High School of the Dead

NOTE: In order to review School-Live, I must spoil an early point in the series. If you want to go in blind, do not read further.

Though the ‘moe gone dark’ genre is a congregation of mediocrity, whenever a new one releases, I can’t help but give it a shot. I try to ignore it, but it keeps nudging me, “Hey, I might be as good as Madoka Magica. You won’t know until you watch me. Eh? Eh?” Yeaaaargh…alright. School-Live, show me what you got.

Four girls and a teacher find themselves trapped inside their school after a zombie outbreak. As the last survivors in the area, they hole up and do their best to make school a home, going out on excursions for supplies. School-Live’s angle to stand out lies in its protagonist, Yuki. She has no idea they live in a zombie apocalypse. The ruined school is still whole, the zombies are still her classmates, and the foraging excursions are merely class trips or ‘Tests of Courage’. Well, you’ve hooked me.

Unlike other psychosis stories where the mental breakdown is the climactic twist, School-Live reveals the secret in the first episode. It instead focuses on how the characters around Yuki deal with her psychosis. Everyone plays along with her idea that all is normal, which creates great contrast between her happy world and the tragic reality. I felt sorry for her.

And School-Live almost nails it.

Alas, we now turn to the ‘moe’ part of the ‘moe gone dark’ genre. Unlike Madoka, where moe is just the outer shell, the style, School-Live’s moe is the focus. When given the choice to show girls doing moe things or girls developing character, this anime chooses moe nine times out of ten. School-Live is the perfect example of what I mean when I say that moe ruins shows – it’s not the ugly character design or the terrible voices, but the story focus.

Imagine you are on episode 9 out of 12 and so far the series hasn’t given much in the way of backstory or world building, and instead of realising the climax is fast approaching, it gives us a beach episode. Are you serious? You haven’t shown how the world got into this state or how the zombies overcame everything Japan threw at them! If these girls kept the zombies out by stacking a few desks and if they are so slow, so easily distracted, so easily killed, how did anyone fall to them to begin with? It’s not as though these are the Nazi vampires from Hellsing Ultimate – these don’t wield rocket launchers. Zombie apocalypses are flimsy premises to begin with, but School-Live does nothing to suspend our disbelief. Instead, we get a beach episode. Yay…

Inner-character – motivations, secrets, psyche – has toe-deep exploration. Even Yuki, who is so far broken from reality, has little airtime to unravel her psychology. Give us more to believe such a mental block would occur and in this way. School-Live strays close to having this psychosis for shock value only.

The most glaring absence is the lack of development for the students-turned-zombies. When one girl has to kill a former classmate, I do not care because they were never people to begin with as far as story is concerned. They are faceless zombies included to fill the space. No one outside of the main five and one other girl have any story or personality to them. Again, cut a few moe sequences in favour of showing us life pre-outbreak.

Fans of Higurashi will also find some disappointment in how tame School-Live’s horror is. When things should go from 0 to 100 in a split second – like Higurashi – School-Live reaches 50 before it’s distracted by more moe. I don’t recall a single scary moment. Tension, sure, plenty of that, but no real horror.

School-Live is still a decent anime. Its greatest tragedy comes from how obvious its faults are throughout the story. The manga apparently has many differences, so may be a better use of your time.

The colourful palette works well contrasted with the ruined environment. Could do without the auras around the zombies – looks silly.

The cutesy VO, mainly for the protagonist, could have been worse for a moe anime. The cheerful OP is so damn catchy. I like how the sequence grows darker each episode, happy scenes replaced by their current state of ruination.

Four schoolgirls and an airheaded teacher survive a zombie apocalypse inside their high school. School-Live’s great idea does not live up to its potential – less focus on moe next time, please.

Recommendation: For moe-gone-dark fans. If you love the contrast between moe girls and a dark world, then School-Live is another to add to your library. Others will likely feel disappointed by this anime’s shortcomings.