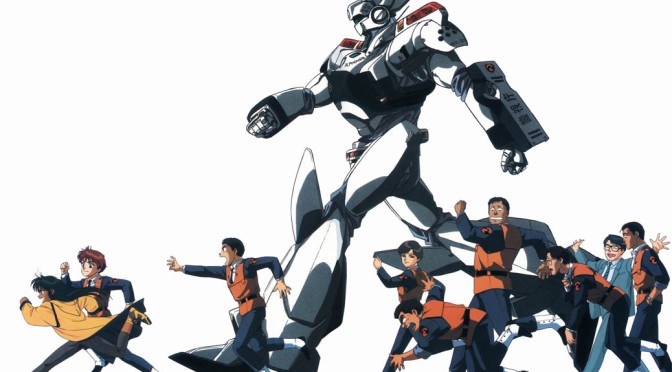 I’m not sure if I am disappointed with Mobile Police Patlabor TV. On one hand, I was looking forward to it. On the other, it wasn’t bad nor did it have anything of particular annoyance. I don’t know how to describe how much nothing there is to this cult classic anime.

Mobile Police Patlabor TV focuses on Izumi and her motley police crew, who use mechs called Patlabors to fight crime and protect the people. Labors – heavy mechanised robots – are everywhere in society from construction to military, so it’s important for law enforcement to know how to handle them.

Izumi is the feisty new girl assigned to piloting the latest ‘patrol labor’ under the mentorship of a veteran from the LAPD. Izumi is also the first and main reason for Patlabor’s nothingness. She is too immature to be believable as such an important member of the police. Her immaturity isn’t the kind to make you beg for a merciful death within a few episodes – it’s simply results in a whole lot of nothing in terms of conflict, development, or anything really.

It’s common to have the protagonist of a comedy be a goofy character, even when in a demanding job. The key, however, to sell us on the goofiness plus the professionalism is to have a professional quality that makes us believe they can do the job. An example that leaps to mind is Jake Peralta, protagonist from TV comedy Brooklyn-Nine-Nine, who puts Izumi’s goofiness to shame. No matter the hijinks he gets up to, the one thing he is good at is being an officer. Yes, Izumi gets the job done (because the author wrote it that way). I still never bought that she was the right choice or even qualified to be a part of the mobile unit. She doesn’t have a professional quality to compensate. As a result, the conflict doesn’t feel serious because the writer didn’t send a serious character to face it.

Most episodes feel like daily life at the police station, goofing around with little conflict and mostly training. For the comedy, Patlabor has its fair share of good jokes, reminiscent of the Police Academy movies, though none had me in pain from laughter. Most jokes tend to be amusing but not ‘lough out loud’ funny, and yet not eye-gougingly bad either. Again, mostly nothing. Full Metal Panic executes all this comedy better.

For an alternative take, Mobile Police Patlabor: The Movie has Izumi as a mature character and the conflict has more weight, both at the expense of humour, which does remove much of Patlabor TV’s identity. Even so, I found the movie more engaging (the shorter length didn’t hurt either). I almost feel bad for not recommending Mobile Police Patlabor TV due to its friendly nature.

Patlabor looks good for its age thanks to a remaster. I like the mech designs.

The dub is flat (“Why you!” – listen to Izumi’s delivery on that line), owed in part to the middling script, but the Japanese actors worked much better with the given material.

A mobile police unit uses mechs to fight crime and try to live a normal life. A bit too ‘normal’ to excite much interest, yet not exactly disagreeable either.

Recommendation: Skip it. Mobile Police Patlabor TV is remarkably unmemorable, which is in itself quite memorable. Watch Full Metal Panic if you want the better comedy side or Ghost in the Shell: Stand Alone Complex for the serious side.