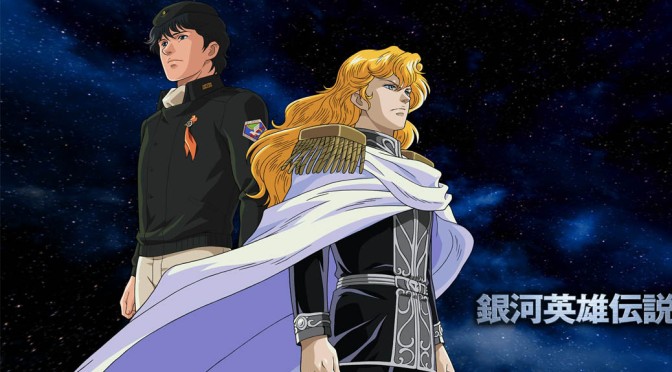 Related: In recommended viewing order, all are prequels (none included in review):

Legend of the Galactic Heroes: My Conquest is the Sea of Stars

Legend of the Galactic Heroes: Overture to a New War

Legend of the Galactic Heroes Gaiden: A Hundred Billion Stars

Legend of the Galactic Heroes: Die Neue These (new version)

How do I talk about Legend of the Galactic Heroes? How do I tell you this is anime greatness without overhyping it? When someone says x movie is the best movie ever made, it never lives up to expectations, even if it is the best movie because of how our brains equate “best” to mean “flawless.” And if we find a single point we don’t like, our cynical brains say, “This is the best? Pfft, didn’t anyone else see he was wearing a Rolex in medieval warfare? Unwatchable!” So, when you read this review, don’t believe anything I say until you see it for yourself. I don’t want overhype.

In an alternate future, the Galactic Empire ruled the stars until several planets rebelled and formed the Free Planets Alliance in the name of democracy. This decades war with tens of thousands of ships and billions of lives on the board has no end in sight. Both sides believe victory is at hand with the rise of their respective heroes – Reinhard von Lohengramm, young, arrogant, ambitious, on the Empire’s front line and Yang Wen-Li the miracle strategist of the FPA.

Legend of the Galactic Heroes is a space opera of epic proportions with so many characters, so many threads, and so much conflict that it’s tough to simplify. In essence, take Star Wars but from the perspective of the commanders rather than the pilots and Jedi, while also dealing with the political complexities of Game of Thrones. The Alliance draws parallels to the UK, USA, and East Asia, whereas the Empire has a more WW2 German and European aristocratic design. As if leading millions into battle wasn’t enough, Yang and Reinhard have to manoeuvre the political landscape of aristocrats plotting for maximum profits in war, politicians using any opportunity to gain favour, factions within factions, and even military superiors threatened by their rise through the ranks. Galactic Heroes throws conflict from all sides at its protagonists. Their mettle tested, inexperience crushed, relationships strained, kindness seared by enemies, the reality of war will change them.

The greatness of Galactic Heroes dwells in its handling of the conflict, particularly between Yang and Reinhard. I’m sure we’ve all seen stories where the author favours their protagonist to the point of unrealistic wins for said protagonist. That problem doesn’t poison this narrative. With two protagonists on opposing sides, such favouritism isn’t possible. A win for Reinhard is likely a loss for Yang and his allies or vice versa. And you never know who will win a given battle. Such unpredictability and masterful plotting keeps the audience leaning forward, hands gripping armrests as a character could die at any moment. The first episode kills what I thought was a major character.

Furthermore, the dictatorship versus democracy motif isn’t so black and white. The easy road is to paint one side as evil while the other shines like a monastery of saints. The hard road means to balance both, using no black or white, just grey across all players in the game. “Who is right?” is a complex question to answer when everyone has flaws. One detail that stuck with me is the Patriotic Knight Police of the Alliance, who will beat anyone that disturbs the peace and “unity” of the Alliance’s democracy – “You are free to say anything you want as long as it’s what we like.”

The quality is even more impressive once you realise Galactic Heroes is ninety-five percent dialogue. You wouldn’t imagine such a dialogue heavy story could be this riveting – in most cases, dialogue dominance does result in boredom – however, this dialogue is so sharp, so lean that every line builds the world, builds character, or advances the plot. You must pay attention.

Galactic Heroes’ overarching plot is a slow one, as is the case in real life war and politics. To offset what could be poor pacing, short stories occur episode to episode. For example, we may see how Reinhard deals with a gluttonous noble in one episode, while the next may dive into a moment of history and build the world with richness that makes loremasters foam at the mouth. A personal standout was the rise of the first Kaiser and how the public gave him ultimate dictatorship, free rights sacrificed for what they believed was the greater good. He then executed 20,000 people on mere suspicion of planning his assassination. The next emperor killed 500,000,000 in an uprising and exiled another 10,000,000,000 relatives by association. Galactic Heroes draws on real world events for its conflicts with an attention to detail rarely seen in fiction – “Those who cannot remember the past are condemned to repeat it.” These writers studied their history.

Longer story arcs often focus on a ship-to-ship battle, where fleets dot space like stars in the night. Though these battles have plenty of action, our view is still from the bridge alongside the commanders – imagine spectating a real-time strategy game. Seldom do we fly out with a dogfighter. That said, important pilots enter the story later on for us to follow.

A most interesting battle occurs early when Yang has the task of capturing Iserlohn Fortress, an artificial and impenetrable planet thanks to its Death Star-like weapon, Thor’s Hammer, capable of wiping a fleet in a single shot. Every battle has complex strategies that keep the audience riveted throughout.

Galactic Heroes has its flaws, of course. Outside of its age, my main complaint would regard some of the minor characters. After a hiatus for several dozen episodes, some important yet unmemorable characters crop up once more and I ask myself, “Who is that again?” for a few episodes. It’s a problem because context is everything with such complex dynamics, where a detail as simple as a character’s faction alignment can change all meaning in their words. The immense crew of memorable characters makes this particularly noticeable.

Alright, I have talked enough. I could go on for days if I don’t stop myself and this is already my longest review by fifty percent – didn’t even touch on the cast of a hundred characters, the planet dedicated entirely to banking, Reinhard’s sister being married to the Kaiser, religious elements, and so much more. I don’t like to set ‘my favourite’ anime in stone without giving it time to simmer as I deconstruct every facet for a while, but I expect Legend of the Galactic Heroes to claim the throne when all is seen and reviewed. I didn’t hold this back for my 200th anime review for no reason.

The art starts old (not 70s hair old) and the animation is a little wobbly. However, the show goes for so long that the art improves significantly. In fact, you can see the difference between old and new within the same scene as it switches shots in season one. Like a lot of older sci-fi, much of our technology is more advanced than predicted, but Galactic Heroes uses a coherence of style and society to draw us in regardless. I would recognise these characters instantly.

Along the art’s vein, audio quality starts feeling old but soon improves. I love the Austrian influenced orchestra and opera, which sounds like attending a war with Mozart playing on one side and Beethoven on the other. The actors are perfect throughout, thanks in no small part to the phenomenal script (see how many industry veterans you recognise in their early days). Outside some occasional Engrish music (for the Alliance national anthem, oddly enough), I have no complaints.

Two factions of opposing ideologies war across the stars as their leaders crumble around them, giving rise to two heroes who will shape the conflict like no other. It is difficult to capture into words the grandeur and depth of Legend of the Galactic Heroes’ story. Characters, conflict, or story, there is little to improve.

Recommendation: A must watch. Legend of the Galactic Heroes is phenomenal in every way and should be experienced by all. However, this is a demanding anime. If you can’t dedicate the time and focus to pay attention, it’s simply not worth trying. Also, do keep its age in mind when you start.

20 thoughts on “Legend of the Galactic Heroes – Anime Review”

Catching up on reader requests