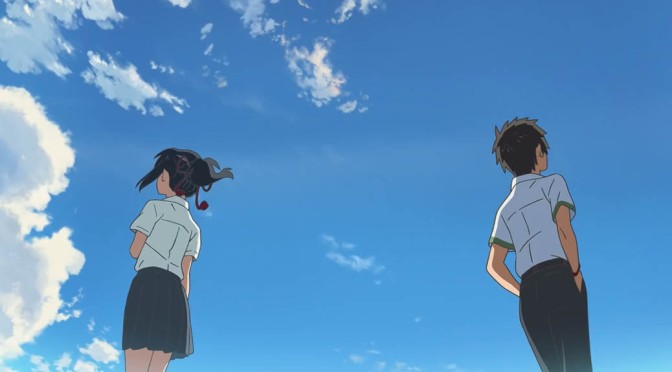 The Girl Who Leapt Through Time

I just returned from seeing Your Name (Kimi no Na wa) in the cinema, my first anime cinema experience, and must review this immediately. Wow…what a film.

Mitsuha lives in a rural town where the train comes every two hours, where cafés are extinct, and yet still has two pubs – right next to each other. She wishes for a life in glitzy Tokyo. Her dream comes true when she wakes up one day in the body of a Tokyo boy her age. Now she must juggle his life of high stress school and part-time work. Meanwhile, Taki resides in her body. They soon begin to ponder this odd connection and figure it out as they periodically live the other’s life.

These two leads are fantastic. If Studio Ghibli is best at depicting children in all their wonder, Makoto Shinkai is best at capturing teenage emotion and mannerisms like no other, in both comedy and drama. For example, the first thing Taki does as Mitsuha is fondle her/his own breasts, which is the obvious gag, but Shinkai gives Taki just the right amount of shock and confusion to make us believe this is how a boy would act, which had the theatre in hysterics. He doesn’t overdo it like an ecchi series. Whereas Mitsuha, she has more hesitation, more embarrassment, yet just as much if not more curiosity at what’s down there. Let’s be honest, girls that age will deny their curiosity – “Eww, that’s gross!” – but they all know they would look in Mitsuha’s situation.

The drama also strikes that balance. When they inhabit each other, they must still live the normal life of their host, which creates an interesting relationship dynamic, for their strengths fill in for the other’s weakness on ‘switch’ days. Other kids tease Mitsuha for being the mayor’s daughter (believed to be corrupt) and she just takes the abuse. However, when he’s in control, he fights back, much to her embarrassment when she finds out about “her” actions the next day. Similarly, she uses her refinement and elegance to further relationships with his peers – while spending all his money at cafés, of course. They’re like two best friends watching each other’s backs without ever being in the same room.

Your Name elevates itself from being a gimmicky romantic comedy by injecting a serious dose – several doses, I should say – of drama that strikes the core of a teenager’s desire to find that special someone. It even knows how adults who have yet to find that person wonder if they missed their chance, broadening the film’s appeal. Where did the romance of my youth vanish? The team didn’t treat this project as a throwaway to fill the summer rom-com slot. No, every piece of the puzzle that composed the story had thought and care put into it.

My favourite aspect of the writing is how accurate Shinkai depicts that feeling, that it’s-right there desperation when trying to remember a dream once awake, as it slips through the cracks of one’s mind. The more you think of the dream, the further away it goes. As the audience, we know the contents of the dream, so it feels even more frustrating (in a good storytelling sort of way) to see our characters forgetting such important events. The tension – aaaaaargh!

If I could find one way to improve this film, it would be with the parents, notably Mitsuha’s absentee father. Their relationship is a strained one, and though important to the story, this point of conflict doesn’t receive enough exploration. The father serves as a plot device, not a full-fledged character. Less important character have more screen time. He executes his purpose well, but standouts come from going beyond that, as seen with other important characters in the story.

I have so much more to analyse, but I don’t want to give anything away – most of the above is in the first act. I went in having seen no trailers, no blurb, nothing other than it being one of Japan’s highest ever grossing films and Makoto Shinkai’s work. His name alone guarantees I will watch it. I went in with positive expectations and came out of it far beyond that.

The problem now is that Shinkai will have difficulty topping Your Name.

Gorgeous. Shinkai and his team’s greatest work yet. The colours, the detail, the light and the animation are all top tier. A single time-lapse of Tokyo blows the mind – and there are several.

Not a bad performance in sight. The two lead actors in particular embody their characters. Shinkai uses his preference for instrumental piano and violin once again to heart-breaking beauty, and the vocal tracks hit the right note.

Two young adults of disparate situations periodically inhabit each other’s bodies and lives. Funny yet tense, heartfelt yet unorthodox, Your Name is an excellent film of dreams and romance.

Recommendation: A must watch. If you see a listing for Your Name/Kimi no Na wa in a cinema near you, go watch it – or wait for the online release. The visuals alone make this a worthwhile cinema experience; the story makes it an enduring one.

3 thoughts on “Your Name. – Anime Review”