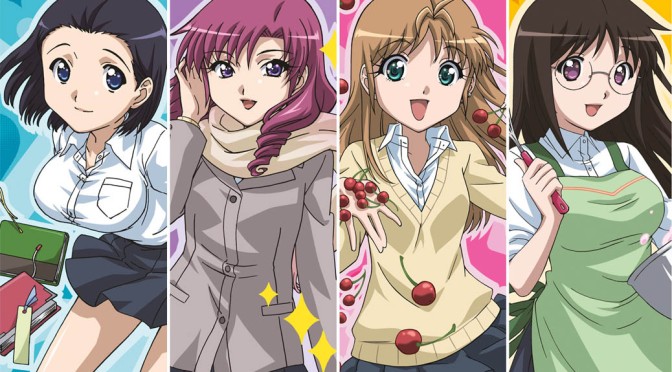 Finally in high school, 15-year-old Yamada can start her mission of sliding down a hundred fireman’s poles, play with a hundred disco sticks, slobber on a hundred ice blocks, take one hundred krainerwurst up the cu— You get the idea. And as a popular and [supposedly] hot girl, surely guys would flock to her for easy mission completion, yes? Well, no, she’s self-conscious about her vagina and believes that guys would never sleep with an inexperienced virgin (not sure what universe she lives in). So, she sets her sights on “Plain Jane” Kosuda, a fellow virgin who won’t notice her lack of experience as he “explodes” his cherry.

You know what irritates me most about B Gata H Kei? It’s not about a girl trying to sleep with a hundred guys. All it comes down to is Yamada trying to discard her “v-card” to Kosuda. I get that the message is “she didn’t need one hundred guys for fulfilment, just one,” but it doesn’t even try the premise. B Gata H Kei says one thing, ignores it, and goes in the opposite direction. It’s yet another in the long line of bait anime.

At first, I thought it would be clever about teen sexuality and the views virgins have on sex. When she checks herself down there in the first scene and deems her vagina weird looking, it fits with what many teen girls think, especially the part about if boys will find her unattractive as a result. Of course, reality doesn’t allow boys to find vaginas unattractive (unless gay), but how are girls supposed to know that? I found this clever. Then when trying for ‘second base’ and Kosuda seizes up at the sight of her bra, she yells in frustration, “Grab my breasts already!” This leads you to believe her aggressive nature will progress the relationship forward. Nope, her aggressiveness contributes nothing.

You want the real kick in the crotch? She never loses her virginity – there’s no sex at all. I’d call this a spoiler, but the show is just lying to you.

If they wanted to be such pansies and have no sex, then at least have her fail in comical ways with a string of guys rather than this repetitive tripe we suffer through. Yamada and Kosuda’s relationship is them taking turns to think, “I don’t know what to do,” “what if he/she doesn’t like it,” and “why won’t he/she do something?” Each encounters ends in one freaking out or her punching him and running off. There’s inexperienced, then there’s every virgin in this anime. How does she not know what an erection is when she brags about her dirty mag collection? No guy is too stupid to know what to do with breasts on a basic level. These characters are too stupid to be funny or engaging at this point. Suspension of disbelief can only go so far.

Another lie is in Yamada’s character. Despite what we’re told, no one behaves towards her as though she’s the most popular girl in class – and why would she be most popular when so unlikeable and so self-absorbed. Furthermore, she’s the plainest girl, art-wise. Believe me, most high school boys would be more interested in her best friend with two large personalities. A high school girl this popular would have little trouble sleeping with many boys, let alone lose her virginity. Have an inexperienced girl? Fine. A girl this inexperienced in merely talking to a boy and be most popular? I don’t buy it. I don’t buy her character or anything in this relationship. Why is this such an issue? Because it’s not funny. The core premise of these characters interferes with the comedy.

Kosuda was the worst character type to play opposite her. He has no personality, nothing memorable about him – yes, it’s part of the joke that she chose him because he’s boring and wouldn’t judge her bedroom technique, but what then? She sticks with him, so he must become a full character. He doesn’t. The entire way through, I was thinking of the couple from His and Her Circumstances, and how the boy plays off the girl’s weakness. They too present a one-note surface, yet hide depth beneath. With Kosuda, the first joke is the only joke. It would have worked if he turned out to be interesting, not just “nice” (code for boring). In this dynamic, the plain guy should have strengths the girl lacks, surprising her in the development of his character, a foil to her narcissism.

Kosuda is so boring the plot almost turns harem around him. Yamada, his childhood friend, and Yamada’s rich rival (who actually wants to bang her own brother) are all after him. Face, meet desk.

B Gata H Kei does have plenty of funny side jokes, little quips made by the best friend and the characters’ ‘erotic spirits’ or the weird questions every teen asks of friends who have “done it” – where did you do it, what if something smells, how did you buy condoms, etc. Sadly, these jokes are the small touches to sprinkle atop the core jokes and can’t save the comedy alone. The rival girl’s housemaid praying to high heaven for the girl to stop wanting her brother’s wang had me laughing aloud as well. Oh, and the English dialogue translated to “Blah blah blah” because Yamada doesn’t understand it was a nice touch.

B Gata H Kei had potential, but the writers couldn’t get past baiting the audience. Why didn’t they say it was a girl on a mission to lose her virginity?

The art looks average with animation composed of many slow pans and static shots, but the worst part is how plain all the characters look, protagonist in particular, despite repeated claims of every girl being hot stuff. An un-sexy ecchi…huh, now I’ve seen everything.

The acting is far better in English – more energy, better quips. The Japanese protagonist sounds terrible with her insufferable fake-cute voice. The lyrical music is sickening in trying to be cute as well.

A girl aims to sleep with a hundred guys in high school, but must start with losing her virginity. Not at all about sleeping with a hundred guys, B Gata H Kei is a lame romance with one guy that goes nowhere and their behaviour defies belief.

Recommendation: Don’t bother. With a baited pitch, plain characters, and no sex, ecchi fans could do with better than B Gata H Kei.