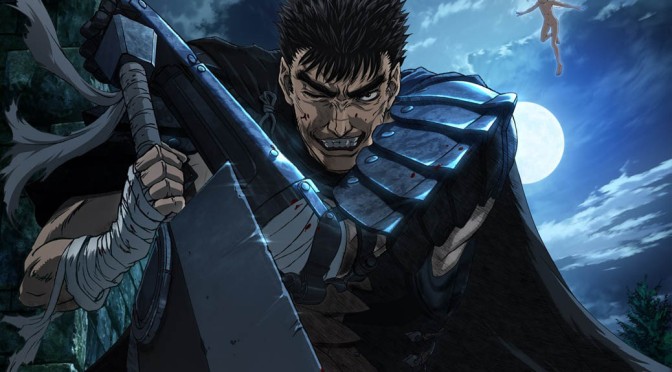 Berserk (2016) covers the Black Swordsman Arc of the franchise, following The Golden Age Arc movies, and when announced, many including myself were excited to see more Berserk. Perhaps the end was in sight at last. What no one predicted was the lack of care such a revered series would receive. An early preview showed but a glimpse of the CG atrocities that awaited us.

Before I get to the story, I must address the glaring art. This still looks like Berserk’s rich world filled with terrifying monsters, but this can’t make up for the awful CG that no amount shaders can mask. It reminds me of Valkyria Chronicles’ cutscenes, which is fine for a game, not anime. The first rule of CG in anime is never use it on organics close to the camera. The modelling at its core hinders all visual elements, while the floaty animation isn’t even fluid, for it chugs more than once. One could do better in modded Skyrim. The abrupt use of 2D on occasion, while better quality, looks out of place in this CG-fest. Furthermore, if insistent on CG, why not use Studio 4C like the Golden Age movies?

Beyond art, the story oozes lack of effort and care. I said this continues off the Golden Age Arc, but it doesn’t really. This seems to skip half of the Black Swordsman Arc in the manga. When we last left our characters, Guts had rescued Casca, yet here, his quest is to find her once again while he’s hunted by demons because of the brand on his neck – demon GPS, essentially. Where’s the bit with her disappearance? All we get is a brief scene that gives a whole lot of nothing. A few too many elements don’t receive exploration or explanation, forcing us to guess their significance.

All right, we’re in the story, we’ve accepted the skipped chapters, what else could go wrong? What bothered me most about Berserk 2016, more even than the CG, is the inclusion of shounen humour centred around a naked fairy called Puck (think Zelda’s Navi without the endearing qualities to make up for the annoying) and some sidekick kid, who reminds of Raki from Claymore, just nowhere near as bad (now that would be some feat). He talks too much. They don’t do much beyond deliver gags from generic battle anime. I know they come from the source material, but the timing is poor regardless. Whom did they think they were appealing to with this juvenile humour? Berserk is far too violent and explicit for the target audience of such humour. It feels more Eragon than Game of Thrones – never a good thing.

Berserk 2016 has positive qualities. The main conflict is against a band of Holy Knights charged with protecting a Holy Inquisitor (read: torturer) and capturing Guts, for he leaves a bloody trail in his wake, including once innocent people possessed by demons. When dead, the possessed and innocent look alike. Most interesting is the Holy Knight Commander Farnese, who reached her position through birth, nepotism, and devotion rather than skill. Her zealous life is ripe for exploration in regards to sex. The story is unrestrained about her lust in the face of religious celibacy and devotion, going into the depravity and secret desires of the human denied intimacy for life. The way she lashes out to being attracted to someone is excellent and shows great depth of character. I wish we got more of her.

One can see greatness in the story when it slows down to develop a moment, but before it truly settles, we’re off again, galloping into the next action scene. The editing is also choppy at times. Almost every episode has a moment where it cuts to a different location, shows us the start of a scene for ten seconds, and then cuts elsewhere. Why show us this other scene if you aren’t going to give it time? It’s jarring.

The story here is good, more so during latter episodes, in the same deep world, characters, and themes, but the missing details would elevate it to the highest tier. The final shot announces a new season in the works. Let us hope they improve significantly before then.

Atrocious CG can be enough to ruin the experience for some. As a side note, the TV broadcast has heavy censorship (there’s lots of nudity and brutality in Berserk), so some aspects look weird, such as a woman with no nipples and shots have a black shadow across half the screen.

Though Berserk uses the same composer as previous iterations, track misplacement is an issue. The OST is weak compared to the greatness that is Forces – Guts’s theme has the same artist, but is the least prominent song of the series. Some odd sound effects: Guts’s sword resonates with a loud clang when cutting demon flesh, as if striking metal to metal. Now, I haven’t killed any demons in real life, but I’m certain metal against demon flesh doesn’t clang.

Branded with a demon mark that keeps demons on his trail, Guts searches for Casca amidst the madness of a holy zealot army. More action than story, Berserk still has aspects of greatness, particularly in its exploration of repressed lust through the commander of the holy knights.

Recommendation: Try it. If you haven’t read the manga, story omissions won’t bother you as much, thus leaving your enjoyment up to the CG. If you can get used to the CG, Berserk: Black Swordsman Arc has enough to engage until the end. But truly, the CG is a challenge.