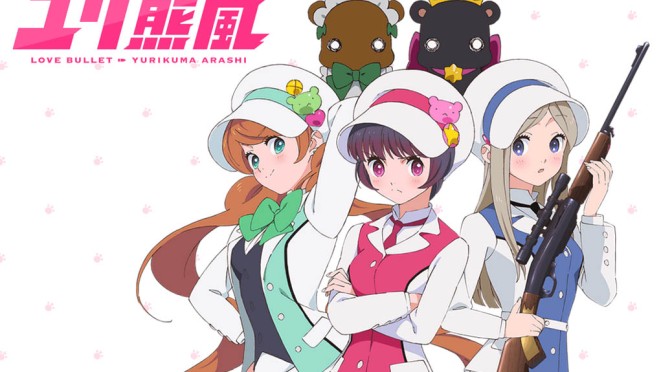 Lesbian bears hunting schoolgirls. That’s all you need to know about Yuri Kuma Arashi. Or it would be if it weren’t a work by Kunihiko Ikuhara, known for his heavy use of symbolism in the likes of Revolutionary Girl Utena and Penguindrum. Yuri Kuma Arashi is simultaneously much better than I was expecting, yet not as good as it could have been.

When you, reader, requested I review a yuri series to accompany the Yuri Manga Guide, I would have thought it would be some vanilla yuri, not this. Yuri Kuma Arashi takes place in a world where a magic meteor gave bears intelligence and they attacked humanity. After countless deaths, bear and human came to an accord, whereby a wall would separate the two species. Peace settled.

Our story starts with two girls transferring into an all-girls’ school, only, these new students are actually bears taken human form. A bear mauled Kureha’s mother and she has since found comfort in her lover Sumika. When Sumika too dies from a bear attack, Kureha swears to hunt down the animals responsible. Did I mention these bears look not like grizzlies but closer to teddy bears?

Lewdness peppers every second scene, but since all we see are stuffed teddies, they get away with it on TV. We all know what’s really going on when Lulu has her head in Ginko’s crotch from behind. Instead of girls going down on each other, they replace a girl’s “nether petals” with petals of a lily (called ‘yuri’ in Japanese) coated in honey. Very subtle.

If all this sounds strange to you, don’t worry you’re not alone. Yuri Kuma has this odd tone with lesbian teddy bears drooling over schoolgirls – can never be sure if they are eating the girl or “eating” the girl – set in a world where mauling is common and having children complicit in murder is ordinary. You see, the bears aren’t the biggest threat anymore. The committee ‘Invisible Storm’ has the task of ferreting out bears in school, no matter who dies in the process, especially those who deviate from the “democratic” decisions. It gives this horror school vibe akin to Another without any gore. (The mauling is adorable – no joke.)

As Kureha searches for answers to the mysterious deaths of classmates, the story becomes darker. The first third leans heavily towards comedy, more or less what you think of with the pitch “Lesbian bear schoolgirls.” The second act descends into the core theme of individualism – the self vs. the group – and humour evaporates. This is where Yuri Kuma falls hardest.

It tries too hard with symbolism and metaphors (not the sexual kind) when telling the story and conveying character. It draws parallels between how a girl with a gun and a girl with claws aren’t so different, but obfuscates the message in convoluted dialogue. Furthermore, it repeats this message, along with the individual vs. group allegory, several times throughout the act. It’s as though the writer wanted to be absolutely sure you understood the subtext. Just pound that in. The allegory takes centre stage instead of what the allegory is supposed to lead to. Imagine a celebrity advocating against poverty that really just makes it about themselves, not those who need help.

The worst part is how it tells rather than shows the allegories – one step away from telling you the allegory’s meaning. It’s ironic; Yuri Kuma wants to be subtle about its message, but by overemphasising the allegory, all subtlety is mauled away. As a result, I found it difficult to invest myself in the conflict. It lacks grounding. There is little room left after all the allegories. And it has more flashbacks than Naruto. Granted, the flashbacks matter, but they don’t help the disjointed structure.

Lastly, the third act has more focus, showing the allegory without a single instance of grinding it against your face. That’s right, act two is largely useless. Act one, act three, good, I enjoyed them. Act two even at four episodes felt a year long.

At the very least, Yuri Kuma Arashi is interesting. It may not succeed in half of what it sets out to do, yet the unusual approach to bullying and individualism warrant a chance from the audience. My fans have some weird requests; it’s always fun to watch something I would have never considered.

The cute art matches the tone of the girls, who are cute without relying on moe trash. I loved the imagery reminiscent of Bakemonogatari’s great art. It does however reuse animation too often.

The OP sums up the show rather well – a girl trying to talk dirty in sultry whispers riddled with innuendo. I am pleased they didn’t give the girls baby voices and I must give the actors credit for performing with absolute seriousness. The script could do with less quirk – “Gao, Gao (growl)” Bear shock!” “Sexy!” “Shabadadoo” “Deliciousmell” – and more substance.

A girl seeks to avenge the death of her mother at the paws of lesbian bear-girls. A wacky premise bogged down by overuse of allegory and metaphor – the ending saves it. Still engaging for the most part.

Recommendation: Try it. If the quirk is for you, you may find enjoyment in Yuri Kuma Arashi.