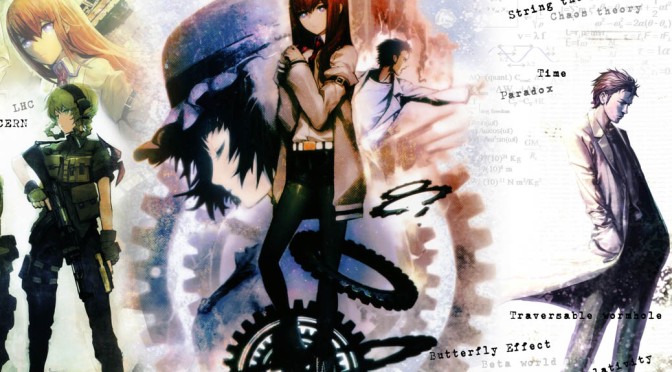 Similar: The Place Promised in Our Early Days

The Disappearance of Haruhi Suzumiya

Note: This review has minor implied spoilers of Steins;Gate. Unavoidable.

At Steins;Gate’s conclusion, I wondered how they could possibly warrant further material. The series had wrapped everything adequately (as well as can be expected from a time travel plot), so what did they have left to explore? However, this was the team that crafted one of anime’s greatest, so I went in optimistic.

That optimism faded before long. This idea was good, but the execution tanked.

After the events of Steins;Gate, Okabe has difficulty coping with time travel side effects. The experiences he went through have taken their toll and triggered PTSD episodes. A great setup. Unfortunately, the PTSD device is shunted aside for a ‘lost in time’ plot, as Okabe disappears from existence, leaving it to Christina to find him again.

The ‘lost in time’ plot, for one, doesn’t quite make sense and, for two, seeing how a hero recovers after a great ordeal would have been far more interesting. How often do we see a hero kill hundreds of enemies or survive a war, yet come out the other end without a single psychological scar? Déjà vu had opportunity to go where few series dare. Instead, it re-treads familiar territory for a third, meanders in the middle, and ends with telling us what we already know.

Even if we accept the direction they chose, it lacks intensity and the layered conflict from the series. Where is the planning that made Steins;Gate’s intricacies work? Here, the time travel elements are rather nonsensical. Steins;Gate: Burdened Domain of Déjà vu’s greatest problem is that it is unnecessary. It was nice to see the characters again.

Similar to the series. Doesn’t have the same atmospheric imagery, however.

I enjoyed the new music tracks. The script lacks the strength found in the series, though the acting is still great.

A year after the events of Steins;Gate, Okabe starts to feel the effects of his time travel, tearing him from time. Christina must find him. Low intensity and plodding pace let down what could have been a great film.

Recommendation: For Steins;Gate fans. If you are a fan of the series, it won’t take much to have you watch more Steins;Gate. You won’t be missing much by skipping Steins;Gate: Burdened Domain of Déjà vu.