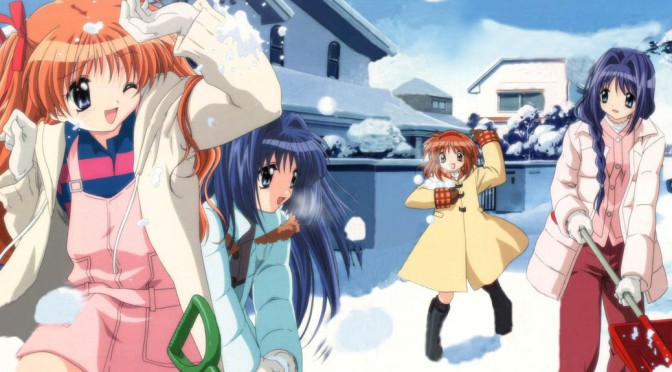 ef: A Tale of Memories

In a snowy Japan town, a man leans over his desk in the night, the table lamp bright on his script. Yes, that’s it; she’s perfect, he thinks. She’s young, cute, and funny. People will love it when I make them slowly watch her die. It will be salacious. Her friends can die slowly as well – unknown disease always works. Oh, I can feel the shivers already when these girls are strung up for slaughter. Such sweetness. Yes, people will be sad, but it’s okay because I just bring them back anyway. And that is how Kanon was conceived.

After experiencing Clannad and Air’s demented view of people and emotion, I thought studio Key could not do any worse. Oh but they did, my sweet winter child. Kanon is the worst of Clannad and Air combined into one story, with even less effort somehow, and repeated four times.

Some guy moves into town to live with his aunt, starting at a new school where a harem of girls all need his help, as each suffers from terminal illness X or fatal curse Y. (Has Key ever tried a different story?) The rear window seat is also free for him in class – the most unrealistic thing in this anime, surely! The idea with these girls is that they connect to his missing childhood memories. Now, don’t imagine there is some great mystery. The amnesia device is solely there so the writers don’t have to make an effort at suspense. “If he doesn’t know what’s going on, then the audience won’t know what’s going on, and that’s mysterious.” There is a reason new writers receive warning against the amnesia plot device.

Similarly, the every-girl-is-sick device works to replace character depth. You see, the writer figures that if a poor, sweet, innocent girl is sick, he won’t have to give her a personality, a brain, to make you care for her. She’s sick and dying, so you must care, lest you become a monster. Feel something! Unlike Key’s other piles of vomit, Kanon doesn’t keep this to the main girl. No, this time, Key-disease infects almost the entire harem.

These girls aren’t people; they are empty socks to fill with waifu-ism. They don’t have personalities; they have quirks – one says “ugoo” every second line (I imagine it’s designed to subtly ask for a certain “goo” from the viewer), another speaks in the third person (more spastic than it sounds), another’s gimmick is to be quiet, another’s to be mysterious, and the last matters because she’s his cousin. They fit fetishes, not characters. The ugoo girl looks, acts, and sounds like an 8-year-old, but claims to be the same age as the guy. He even calls her out on it, but rather than work against her, this intends to make her cute.

Each girl’s arc follows the same formula: start with comedy (actually quite good for the first girl), have the guy mock her, she falls for him, and he falls for her. Suddenly illness/curse! She grows useless, he fixes her problem, and she dies. You may be thinking I just spoiled something, but these deaths are so nonsensical that it can’t be spoiled because it isn’t a twist. It’s better to know you are about to fall into the septic tank. Furthermore, this repeats with most of them. Even then, it doesn’t matter, for they all revive or become cured immediately afterwards. How? Because ‘miracles.’ I wish I were joking. The girls line up for execution just to be brought back.

This is the height of writing incompetence. The writer claims we should feel something for these girls, that their plight is worthy of your sorrow, but when the writer has no respect for the characters, why should we? Their deaths aren’t sad – they’re hysterical. Even now, I laugh as I think back on them and the source of these miracles. Key leaning on the supernatural element to solve all problems as always, I see. And the guy, he sure gets over these girls quickly. The next episode he’s already trying to slip one to a different girl.

Sadly enough, the protagonist isn’t a bad character at the start. Unlike the typical harem protagonist, he has a personality – the most of the entire cast. His sarcasm and mockery lends well to the comedy, sourcing most of it, and for the first few episodes, while not great, is at least funny. I first thought Kanon was something different from Key, a pure comedy, but a reader wouldn’t have requested this review if it didn’t fit the Key mould. It turns out Key has no idea how to balance comedy and drama. His personality vanishes alongside the comedy.

However, as bad as all the above is, it could be worse. I wouldn’t have believed it if I hadn’t seen it in the 2002 version of Kanon. 2006 Kanon is ugly, but 2002 Kanon shows you what a true master of renting space can do with a brush. Take everything from 2006 Kanon and pulverise it in the face – script, characters, acting, art, all of it trash. Still, having something worse doesn’t excuse this Kanon’s atrocities. If anything, it should have been a warning. I do have to applaud Key’s audacity to present such trash and claim it’s deep and emotional.

Key’s signature ugly characters could have been worse – see pic above. Key casts are starting to blend into one. The only other male character looks exactly like the best friend from Clannad (same English actor as well), and fills the same role of dunce.

I swear you could swap the music with any Key production and the viewers wouldn’t notice. Voice acting is good in English, despite the limited script, and worse in Japanese.

A guy helps his harem line up against the wall at the end of a barrel labelled “unnamed terminal illness,” just so miracles can solve everything afterwards. No more to be said.

Recommendation: Avoid it. Unless you enjoy laughing at people dying, avoid Kanon. Outside some jokes in the first few episodes, Kanon has nothing of value unless one uses it as a warning of how not to write a story.