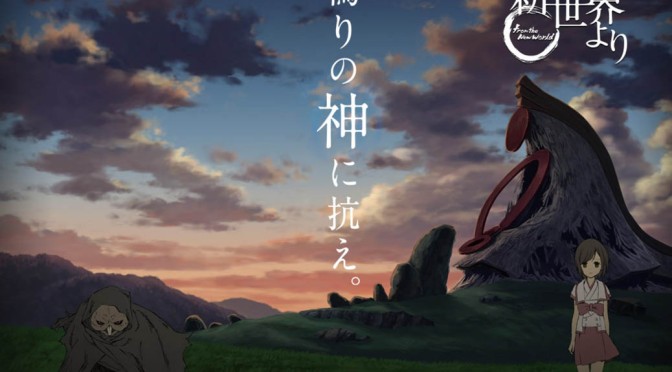 A Lull in the Sea

“In the school’s restricted section, did you know it’s full of graves?” one boy says to his circle of friends. “No way!” another gasps. A third leans forward. “Yeah! And I’ve heard there’s this creature called the balloon dog.” “What is it?” “If you get too close, it gets bigger – like a balloon – until it explodes!” “Woah…” Tension clings to the air like an ever-thickening spider’s web. The campfire pops.

From the New World strongly resembles the stories we used to tell each other around the fire – mystery, suspense, and much embellishment. This is a surprise pick for me, an anime I watched solely on the recommendation from Shiki. It follows a group of friends, psychics in a specialised school, but as days pass, they begin to realise more lurks in this school and their lives. The tale starts small, simple, before it escalates into a dangerous adventure from primary school unto adulthood. So much so that the first few episodes are a poor indicator of what’s to come.

One problem is New World’s tendency to get distracted like a dog spotting a squirrel, going off on episode-long tangents that could have taken the background in more important story. For example, an early episode focuses on psychic football for the whole episode, just to make a small point at the end. It’s a similar issue with the main threads as well. We get a chunk of kids’ stuff, then a chunk of monster conflict, and a chunk adult drama afterwards, all separate rather than woven together. Thankfully, as the threads converge, this issue vanishes.

The convergence of these threads holds New World’s strength, for where the story ends is unimaginable at the start. New World hides its intentions well, too well even, as many may quit before the story flourishes, before the villain unveils his plan. And what a great villain it has. I can’t say much, lest I give anything away, but this may be one of anime’s greatest villains. The motivations, the plan, the deception…beautiful.

On the hero side, we have these children, a mixed group that faces a lot over the story’s course. The progression succeeds, for the most part. After time jumps, some personality changes aren’t quite believable nor sold to the audience. These baffling shifts end up not mattering within an episode or two of the jump, strangely enough, so it isn’t a big problem. They tried too hard on the shock value, I wager.

New World’s biggest failing, in my eyes, stems from omitted material. During early episodes, we see glimpses of the past, which I took as indicators of future plot. Alas, the flashbacks are irrelevant in the grand scheme and become a missed opportunity, where they could have tied past, present, and future into an expanded scope, making use of the mysterious world largely left untouched.

I suspect From the New World won’t be on many people’s radar. It’s an unassuming anime without anything flashy and grandiose to draw the eye of the passing viewer. For those who stay, however, a dangerous mystery awaits.

The characters have almost no shading or highlights; they look like stickers over a background, particularly during animated close-ups in daylight. Thankfully, most scenes take place at night or indoors, where the mood lighting and shadow layers add visual depth to this depressing world. It seems they forgot they couldn’t use that technique in the sun. One episode features flying boulders and they look hilariously awful – the lowest quality CG with no effort to blend into the scene. Good animation elsewhere.

The music is unsettling, and like the mood colouring, adds atmosphere. The weird ED got me the first time, thinking my speakers had broken. While early episodes don’t show this, the overall script is great and performed well in either language.

Psychic kids uncover the truth about their school and the world’s past, delving into a mystery far more dangerous than they could have anticipated. Once past the weak start, From the New World weaves conspiracy, social commentary, horror, and drama into a beautiful tapestry.

Recommendation: A must for mystery and campfire horror fans. There is no breathing room in From the New World, so if you don’t like an oppressive atmosphere, this won’t be for you. However, if you enjoy a slow-burn mystery, From the New World delivers greatness.

9 thoughts on “From the New World – Anime Review”