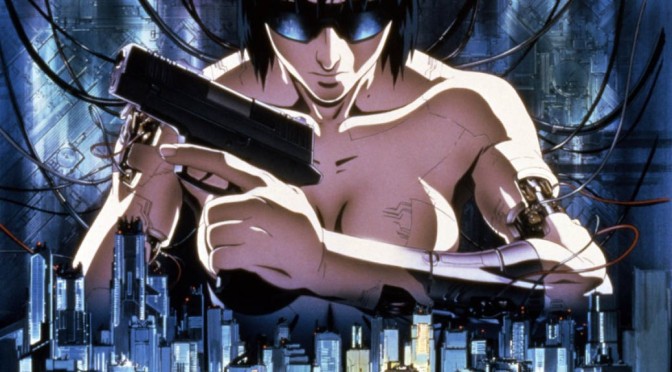 Japanese Title: Ghost in the Shell

In the year 2029, the human world has become one with the cyber world through the field of cybernetics. An unaugmented human is the rarity. This merging of worlds has brought a new vulnerability to humans – brain-hacking – and a hacker known as the Puppet Master is taking full advantage. Enter Major Kusanagi and her Section 9 group of cybernetic cops to investigate.

Ghost in the Shell showed me it was something special within minutes. I am not referring to Kusanagi’s camouflage skin, which is awesome, but the ‘Making of a Cyborg’ segment where we see her creation into a being far beyond that which is human. The sequence takes us through every stage of the process from her metal and muscle frame to her synthetic skin. Coupled with the ethereal music, I felt a genuine sense of watching an artist bring something to life, the creative process made manifest, the layers upon layers that go into a single human. Magnificent.

Kusanagi was bred to be the ultimate entity of justice – skilled, focused, and with a seemingly single-minded life against crime. She isn’t sure of her origins, and seeing the Puppet Master’s ability to implant false realities into the brains of others – similar to Total Recall – has made her question the truth of her own thoughts. Though she is more machine than woman, she shows a curiosity for the world. The film’s acts are punctuated by these moments where Kusanagi roams the city streets and lets the music, the environment take over as she absorbs what she knows is concrete, what is real, what will forever be real in her cybernetic mind. The world may be dirty, but it is alive to her.

I went into this film for the action and the futuristic setting, but I came out fixated on the calmer moments and the relation between organic and cybernetic. The way the villain manipulated people was an engaging and terrifying possibility. A civilian illegally hacks his wife’s mind to find his daughter after his wife took her away in the divorce; in reality, the man was never married, doing the Puppet Master’s work by proxy without realising it, leading the police to dead ends. Great idea for a villain plot – I enjoy seeing villains who rely on something other than strength.

Aiding Kusanagi is her partner, Batou, also augmented with the latest tech – grafted sunglasses seem to be a staple of cyberpunk augmentation. It isn’t cyberpunk if no one has built-in sunglasses. Kusanagi’s purpose for living does make her a little too eager to dive into enemy territory and Batou must act as the voice of caution to remind her of her limits. Regardless of caution, he will always enter the fight with her once she has decided.

My only serious complaint with Ghost in the Shell is the short length. So much of the world and the story had room for exploration. I want to know more about Kusanagi, about her history, the history of cybernetics. How does the world cope with this technology? What laws have they enacted? Great worlds and characters always leave me asking for more – I guess that’s why Ghost in the Shell: Stand Alone Complex is a reality.

Ghost in the Shell’s grimy, rainy, futuristic world is brought to life with detailed art and great animation. The ‘Making of a Cyborg’ is one of my favourite sequences in anime. The attention to the mechanics of the cyborgs and the tech is a delight.

The music is unusual, psychedelic, ethereal chants, and I love it. The fit with the setting and humanity themes is perfect. Ghost in the Shell is from the era of great dubs for films, so the choice is up to your preference. The Puppet Master in English sounds like The Architect from The Matrix Reloaded – probably where the Wachowskis got the voice, having admitted Ghost in the Shell’s influence on their films. 90s bleeps and bloops made me chuckle.

Cybernetic police investigate a ‘ghost-hack,’ which allows control of people’s brains. An introspective film set in a grimy world of tech and blurred lines between human and machine. Needed to be longer.

Recommendation: A must watch unless you don’t like cerebral sci-fi. Ghost in the Shell is a great film and Stand Alone Complex is there if you want to see more.

11 thoughts on “Ghost in the Shell – Anime Review”