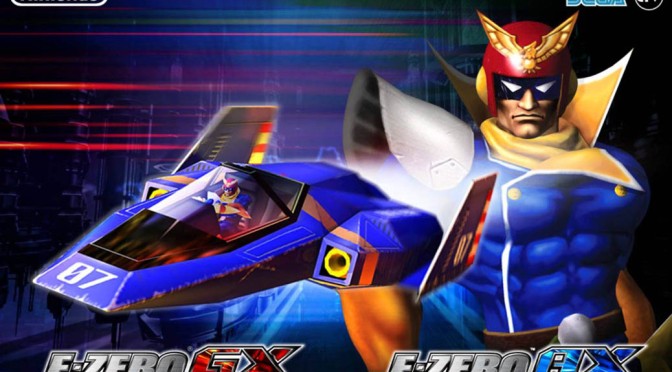 Length: 20 hrs. to experience everything once. Much longer to master harder difficulties.

Take Mario Kart’s Rainbow Road (the most punishing one in your memory), increase the speed by a factor of one hundred, where falling off restarts the level, and you have F-Zero GX. Speed, speed, and more speed! F-Zero GX is a challenging arcade racer all about going fast and living on the edge of the track.

You will race at 60 FPS on snaking half-pipes in a lightning storm and tear across an undulating track inside a volcano, reaching speeds over 2000 km/hr. as electronic rock and techno gets you pumped. F-Zero GX requires great skill and focus to complete its twenty-six tracks (fifteen unlocked at start) across five cups, competing against twenty-nine other drivers. Now, the game isn’t impossibly punishing to new players. Several early tracks are quite straightforward in their design – it isn’t until later tracks that guardrails become a rarity – giving you adequate room to improve. There are also four difficulty levels to ease up the competition, so don’t feel intimidated by the difficulty.

My biggest complaint, and most frustrating feature of the game, is the lives system in Grand Prix mode. Depending on difficulty level, you have a certain number of lives to retry a race if you fall off – unlike Mario Kart, falling off ends the race. Run out of lives and you restart the entire cup. This mechanic adds nothing to the game but frustration. The time it would take to get back on track would be penalty enough.

If you want some story to go with your eye-watering races, F-Zero GX features a nine-chapter Story mode with Captain Falcon against various opponents. The story isn’t anything special, but the challenges are fun (and difficult) and a good diversion from gnawing at your controller after yet another fall off Phantom Road.

The controls are a straightforward movement-accelerate-brake scheme, as in every good arcade racer. The shoulder buttons allow you to strafe with quick side-thrusters, adjusting your driving aim with precision or for drift on the turn. You can do a spin attack (only form of attack in the game) to repel other racers at the expense of speed, though it’s usually a better idea to avoid others instead and maintain speed. After the first lap, you can boost at the expense of health, creating an interesting cost-to-benefit scenario. As you master the game, you will find yourself pushing that health bar down to a sliver – what a rush! – until you reach the next pit area to restore health.

F-Zero GX has more customisation than most arcade racers. For the simple, dozens of premade cars are available for unlock, but if you want more control, you can mix and match parts into some funky cars with custom stat balances. There is also four-player couch co-op for those of you with a couch. It takes a new kind of skill to see where you are going on a quarter of a TV at blinding speeds.

No game matches the sense of speed found in F-Zero GX, especially coupled with such sharp driving and inventive track designs. Whenever I need a shot of adrenaline, I load up F-Zero GX select Cylinder Knot, my favourite track, and I am ready to tackle anything for the day.

Recommendation: With how cheap a GameCube system is, it won’t cost much to get the game second hand, though the game itself is somewhat rare (still no virtual console release). The Dolphin Emulator can increase the resolution and frame rate if your PC can handle it.