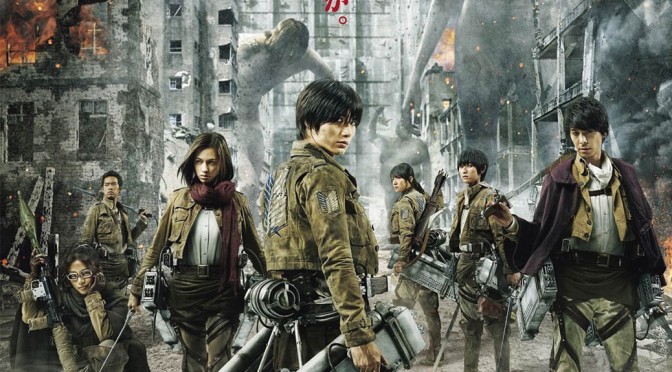 When the Attack on Titan Movie trailer released, many were quick to point out the wholly Japanese cast and non-European setting, a ruination of the source material. Ironically enough, the Japanese lore localisation is one of the few positives about this film.

Finding a full European cast fluent in Japanese, recreating a medieval city, and hoping everyone can act in Japanese are unrealistic desires without a colossal budget. The production had no choice but to go Japanese and film locally. With those two limitations in mind, they did a great job in adapting Attack on Titan’s setting. Rather than a medieval locale, we have an industrial era Japan with a post-WW2-apocalyptic vibe – all is changed to match. The boundary wall to keep Titans out looks made from ship hulls, sheet metal, and stone salvaged from derelict dams, vehicles replace horses, and grease and oil mar the populace. Considering what they had to work with, they could not have done much better in this regard. Keeping the European names is the only strange remnant from the source. Recognisability, I assume.

That’s where my praise ends. The acting from younger actors is rather poor – some even try to pull exaggerated anime faces, which look spastic – while it’s clear the veterans have nothing to work with in the soulless script. It is hard to pinpoint where the character development is supposed to be. Or did they forget to include it in the story? Honestly, if you haven’t seen the series, I wouldn’t blame you for not knowing what personalities they’re meant to have. The characters weren’t great in the anime, but still better than here.

On the positive side, this flat script also squashes out the many annoyances from the series, most notably the shounen trash that plagued the narrative. No longer do we have to endure inner monologues stating the obvious at the most inopportune moments. We don’t waste an hour of our lives on a training arc void of tension and conflict. And we aren’t inundated with character introductions only to kill them next episode. The film’s length limitations highlighted the utter uselessness of these elements in the series.

That said, alongside these elements, so too has the action waned. Yes, the gore is still present – Titans tear people limb from limb, chomping down on juicy humans – and the Titans are creepy; however, the one thing everyone remembers from Attack on Titan is the Spiderman-esque action, and the movie has so little of it outside the finale. Worse yet, the visual effects when swinging around the Titans are rather awful. It looks obvious they didn’t swing the actors 1:1 in a blue room to mirror the movements on film. If I had to guess, the actors hung suspended by a fan with a camera simulating movement – if this isn’t the case, I would be amazed. The CG as a whole is alright, but this is a travesty.

In the end, I must commend the team for the great work in adapting the setting, which couldn’t have been easy in the face of Attack on Titan purists, but the remainder of the film is a letdown. This movie is by no means bad – it’s no Fantastic Four – just average. The team said they were going for a Godzilla feel and succeeded.

Recommendation: If you didn’t like the anime, the Attack on Titan Movie won’t help. If you are a fan of the anime, it’s worth watching out of curiosity, if nothing else, for how they tackled this titanic project.