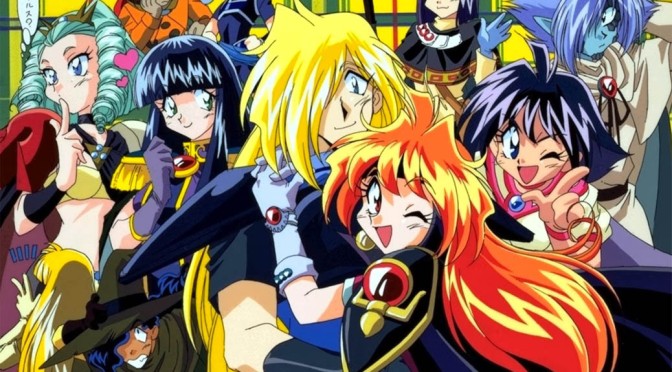 Lina Inverse (the inspiration for DotA 2’s Lina hero) is a powerful sorceress with a hunger for treasure and all-you-can-eat buffets – and a secret desire for a larger bust size. Along with handsome, gallant, dim-witted knight Gourry, she travels the land in search of treasure and monster bounties, all the while hunted by bandits and an evil priest who seeks to resurrect the Dark Lord. Along the way, Lina and Gourry stop for regular eating contests against each other.

Straight up, Slayers is hilarious. From Gourry’s inability to remember names, to Lina doing more harm than good with her signature spell ‘Dragon Slave,’ to priestess Sylphiel’s voice acting, Slayers is packed with laughs. Gourry having to marry a warrior – Gourry as the bride – to secure safe passage across the sea, only to face an effeminate dragon, had me in stitches. And the voice work in English makes it even funnier. Hearing Pokémon’s Brock as Gourry makes the dim-wittedness all the better; it truly seems as if Brock is roleplaying a knight. Ash as a little girl? Perfect. Professor Oak as a bandit burned by Lina to the point where he now looks like a mummy? Couldn’t be better. Even Sylphiel’s weak performance, makes it all the funnier.

There isn’t much more you need to know beyond that. Slayers has plenty of humour, magic, action, modern references, and fun characters to keep you entertained throughout. Yes, the plot is typical for a morning cartoon, but the humour elevates Slayers above the rest.

I went in with low expectations and came out with pain in my sides. An easy recommendation.

Doesn’t look great; morning kids’ cartoon quality, but don’t let that get in the way. The deformed style and colouring match the humour, so it doesn’t detract from the experience.

Highly recommended you watch in English. Made even funnier when you recognise the Pokémon voice cast. However, best of all is Sylphiel, whose acting is so bad, so unenthusiastic that it is hilarious. She is the voice I hear inside my head when I do a sarcastic “Oh no, don’t kill off that irritating character. Nooooo….”

A straightforward fantasy adventure to stop the Dark Lord. Doesn’t hold any surprises plot-wise, but plenty in the comedy department.

Recommendation: Watch it, even with the mid overall quality. The humour in Slayers is enough to warrant a viewing. Don’t feel intimidated by the length of the numerous sequels, for the first season has enough to satisfy.