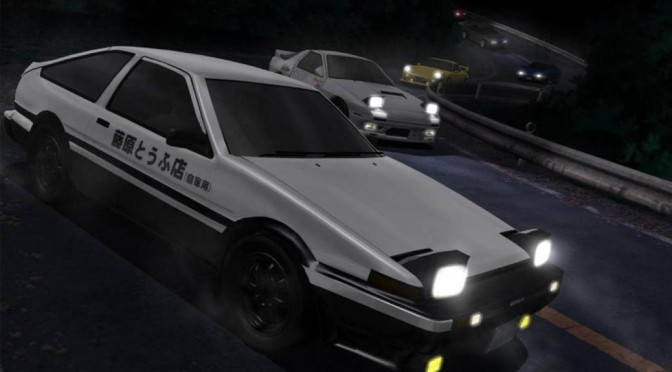 Initial D got me interested in cars and racing. That should tell you what I think of this anime, and while Initial D may not be as beginner friendly as the likes of Top Gear, it could be what sparks your interest as well.

While driving the mountain pass one night, Keisuke of the Akagi Red Suns encounters the ‘Ghost of Akina Mountain,’ an AE86 (Eight-Six) car that takes corners at seemingly impossible speeds, passing him with ease. Keisuke challenges the local team, Akina Speed Stars, in the hope of a rematch. Unfortunately, the Ghost isn’t a part of the team. Akina leader Iketani has his pride on the line to defend his turf. However, after seeing his opponents’ speed, he pushes it too far and crashes, totalling his car. He now seeks the 86.

It turns out the 86 is driven by Takumi, a high school kid, son of a racing legend, friend of Iketani’s, and a guy everyone swore had no interest in cars. Takumi inadvertently learnt to drift while transporting deliveries for his father’s tofu shop since the seventh grade. He has to deliver tofu on time and undamaged while driving at night when no police are out to catch an underage driver.

This is a great origin story. It has a good mystique to it, yet remains within the realm of plausibility. Having driven the same roads for years and used the most efficient racing lines, it makes absolute sense that Takumi would have mastery over his car and the road. He comes into the challenges with a natural instinct for racing, but no clue on the mechanics of cars – he doesn’t know why his technique is effective, he just knows it works. To top it all, he has this no-cares-given attitude that infuriates his best friend Itsuki, who can’t understand why the guy who cares least for the sport is the best among them. Takumi only agreed to race in exchange for time with the car on Sunday and a full tank to go on a date.

To counter Takumi’s dry sensibilities, Itsuki brings humour with his desperation to find a girl (despite his motto, “Street racers don’t need girlfriends!”) and his overblown reactions to the most minor of incidents (the duckface art helps in this regard). He becomes Takumi’s cheerleader, fancying himself as a great racer too one day.

As word spreads of the 86’s prowess, more drivers come to challenge him, often in disbelief that a young guy could be as good as his reputation. He meets all sorts of personalities from the proud to the arrogant to the douchebags. These varied opponents also bring a variety of challenges, which keeps the action from becoming stale. Against Keisuke, it’s a simple race; later, there’s an overtaking race; my favourite is the gum tape deathmatch, where the driver’s hand is attached to the wheel, restricting steer unless one is willing to break their wrist.

The passion for drift culture is evident from the outset. The creators put a lot of effort into detailing the cars, exploring the mechanics of drift, why people love it so much, and what it’s like to be behind the wheel on the mountain at midnight. And I would expect no less, as legendary Drift King Keiichi Tsuchiya is an editorial supervisor for the anime. (Watch Itsuki’s actor unleash his inner anime character when Tsuchiya takes him out for a spin in his own 86.) In fact, Takumi’s driving life is based on Tsuchiya’s own – both learned doing deliveries, came from humble roots, and gained fame in mountain racing. It would be like having Michael Schumacher for an F-1 anime.

Initial D isn’t all racing, however. Between races, the plot takes the time to develop characters – the third challenge doesn’t start until halfway through First Stage. They could have easily doubled the number of races at the expense of characters if they so wished. Even with Takumi’s romance subplot not amounting to much in the long term, I am glad they gave the characters equal screen time to the cars. It does drag a little, though it isn’t anything serious. I actually grew more tired of the pessimism from Takumi’s friends each race. One would think that after seeing his talent, they would have a modicum of faith. Thankfully, Itsuki carries the optimism before long.

Initial D strikes a good balance between cars, characters, and mechanics. Even if you don’t know the difference between a turbocharger and a supercharger, it doesn’t matter; Initial D gives you enough to work with to enjoy these intense races.

Initial D’s distinctive style doesn’t look great by today’s standards. I still laugh over a decade later at the duckface character art, and the car CG is noticeable. That said, do bear with the art – the series is worth it – and it improves with each season. (I would give Third Stage a ‘High’ art rating.) The jump between First and Second Stage is significant.

The music is hype-inducing eurobeat and the acting is great in Japanese. For the English, however, you need to be aware of two different dubs. In Tokyopop’s dub, they not only supplied weak acting but also replaced all the music with garbage 90s teen rock and hip-hop. This is what an awful dub looks like. Thankfully, once Funimation acquired the license, they redid the whole show with the original music and better acting – still not as good as the original Japanese, but certainly watchable.

The birth of a Drift King in Central Japan’s Gunma prefecture. Tense races, nice cars, and a love for drift. Worthy of the source material.

Recommendation: A must for petrolheads and those looking to get into cars. If you have no interest in cars, Initial D is unlikely to hold your attention, unlike Top Gear, which had mass appeal for three blokes being ambitious but rubbish.