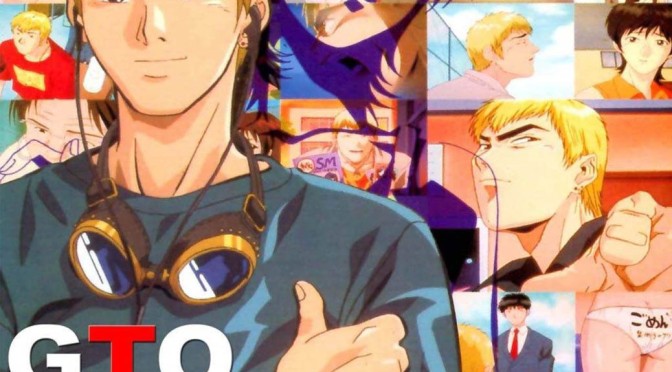 Great Teacher Onizuka (GTO) is one of the classics of anime comedy in the West. It came during the time of Trigun and Cowboy Bebop; however, unlike those two, it hasn’t aged as well. I must have started this anime several times over the years, never getting past a few episodes before giving up. Only once forced for review – I could hardly ignore one so popular – have I finished it.

GTO was a much better show in its time. Now, after having seen several anime with similar humour, but better in almost every way, I found GTO’s forty-three episodes a bit of a slog to sit through. Enjoyable, sure, though not hilarious as it would have been at release.

As the title implies, GTO follows a teacher called Onizuka, a former gangster with an unconventional teaching style and a fetish for being called ‘sensei’ by schoolgirls. He isn’t afraid to play pranks or shame his students if it means teaching them a lesson. Importantly, he has no qualms about shaming himself in the process, and his morals are in the right place (yes, even when he lusts after high school tail, for he would never go too far). He doesn’t see himself above the students, as other teachers do. He’s a good character; I like him. Without him, the series has little left to show for itself.

The series is broken down into a dozen or so short stories where a student (or several) tries to break him or get him fired. Since he has less shame than the whole school put together, their pranks rarely faze him, however, and he reverses the situation in the process, often turning them into friends with his genuine character and care for them. Mean girls, delinquents, wannabe thugs, and the pretentious, that’s the sort he contends with.

I will admit that I did find this formula enjoyable the first few times, but I grew tired before long with the predictable nature. My attention waned with the introduction of the “genius” character, a blonde girl who drives teachers mad with her supposed intelligence and know-it-all nature. Supposed, that’s the key problem. Several characters insist on her genius status, yet she doesn’t display an ounce of peculiar intelligence, even being outright stupid in many scenes. This would have been fine if played for laughs, but no, we are meant to believe it. It’s clear the writer hadn’t the slightest idea on how to craft her.

This ‘take it seriously’ problem bleeds into several other recurring student characters. They have a trait that no one in reality would take seriously, yet they expect the audience to go with it instead of laughing at it. For example, one girl is dumb as bricks, which no one addresses. When her short story takes centre stage (literally, in this case, as she has to perform on stage), no one tries to teach her new skills, instead we have to buy into some morality tale somehow making her succeed. Remember, none of this is presented as comedy.

You may note that I haven’t named any of these students. To be frank, I cannot remember any of their names, as they are rather single purpose. They are not flat characters, so to speak, but they do one continuous thing throughout the show outside of their three-or-so-episode arc. Take an early character, a pretentious Photoshop pro. He superimposes Onizuka into depraved sexual photographs and posts them around school to embarrass him (Onizuka doesn’t dispute their validity, as he does believe these scenes are within his perversion, which is hilarious). Onizuka eventually figures it out and makes an ally of the guy. From then on, that guy is the Photoshop guy – he doesn’t develop further nor does he deviate. That’s not to say he’s a bad character, but to have him stand still in development for nearly forty episodes is pushing it.

I feel GTO could have done with fewer episodes, a season’s worth at most. Concentrate those jokes, pick the most interesting students and arcs. Cut the rest – start by axing the “genius” girl.

GTO is by no stretch of the imagination a bad anime. The problem with comedy is that if I see the same joke but better elsewhere, the weaker won’t make me laugh, even though I know it is a good joke. Yet I could watch the best version a dozen times to the point of pain. Onizuka versus the vice principal hell-bent on getting him fired was done better in Full Metal Panic Fumoffu (and it only took half an episode to show the best material). The vice principal’s eccentricities, Nichijou has eclipsed in one short (see here). And Golden Boy has the perverted humour locked down.

The problem, ultimately, is that I have already seen the same, only better. Who knows, you may find laughter in Great Teacher Onizuka where I did not.

Looks dated; however, the visual humour, Onizuka’s face in particular, is funny. Not much animation, and what is present is a bit stiff – not talking about his pants.

Steve Blum steals the show in English – so-so for everyone else in both languages. Good, but not great. Nothing outstanding to the music.

A gangster turned teacher tutors his students in morals through unconventional means. Humorous, enjoyable, but the age shows.

Recommendation: For classic anime fans. You may still get a good laugh as a newer fan to anime if you haven’t seen many comedies of the medium.