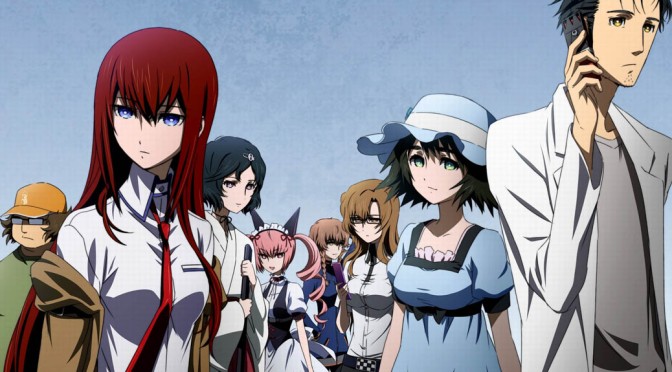 The Girl Who Leapt Through Time

I had intended to save Steins;Gate until after clearing all reviews for anime I have already seen, but when a reader requests, I must get on it! (One can never be sure if they are part of The Organisation out to test me!) Having seen Steins;Gate high on multiple rankings, I thought to myself, “It’s probably good, but not that great.” (I had played the visual novel, but the writing was so padded that several hours equates to a couple of episodes and didn’t have time to complete it.) I have found that the ‘Cute Girl Metric’ often indicates the disparity between fandom versus actual quality: The more cute girls in the cast, the worse the show compared to the mouth-foaming fanboyism. (Yes, I do doubt Madoka Magica’s quality, but I am waiting to be proven wrong when I get to it.) Steins;Gate has three; three cute girls doesn’t bode well for quality. Bloody hell was I wrong! Not only are the cute girls most relevant, they have more characterisation than most anime protagonists do.

Steins;Gate tells the story of self-professed mad scientist Okabe and his team’s experimentation with time travel – think Terminator meets The Time Machine. At a speech on time travel by a rival scientist, he meets an auburn-haired girl who says he has a message for her, though they have never met. He finds her dead minutes later. As he texts his friend the news, time and space tears around him and he finds himself transported back to before the professor’s lecture, the girl alive again. His time machine worked, inadvertently. The ingredients to the time machine? A microwave and a phone…

This goofiness with the time machine’s components summarises Steins;Gate’s early, deceptive tone. The atmosphere begins light-hearted, where we meet the rest of the lab members, an eccentric bunch, indeed. One girl only communicates through text message, even when face-to-face. Daru, a tech guy, is the waifu king (“It doesn’t count if I fool around on them with a flesh and blood woman!”) and a colossal pervert, but not of the drooling variety; he prefers the subtle approach, the innuendo style – “Could you repeat that, only slower and in a whisper?” Then there is Mayuri, one of aforementioned cute girls, whose job is team morale and making cosplay. Yeah…not exactly what you think of when you hear ‘crack science team.’ Lastly, an actual scientist turns up in the form of Christina, the auburn girl who is supposed to be dead.

Together, they experiment with time travel by turning bananas to goo and sending text messages back in time. These are fun, lively characters, their eccentricities a pleasure to spend time with – they have to add ‘real name TBA’ after every mention of a wacky invention. Unfortunately, this light-hearted beginning leaves the main conflict out of sight, as if Lord of the Rings said the ring should be destroyed, but doesn’t tell us why until later. (I can’t tell you the conflict as it would mean spoiling much of the pre-conflict events.) However, soldier on and you won’t regret it; besides, the characters are so likeable that they make the wait easy.

Once the conflict is revealed, just…brilliant. Each experiment descends them further and further into chaos with global ramifications. Pay attention with this one, trust me. The narrative gets to a point where you need to juggle several plot threads at once, each similar but for a few anomalies. Steins;Gate has the sort of writer that knows what it means to build the plot, to escalate the conflict – it keeps getting better. Looking back on the many twists and foreshadowing, one can see that they took their time with planning the whole plot before a single scene was shot.

One point of note is the science jargon. Don’t be discouraged if you have no idea what quantum theory and string theory are about; it helps to have the knowledge prior, but the dialogue does a good job of explaining the essentials. If you hear some unknown science speak, just listen to Doctor Who, “…it is more like a big ball of wibbily wobbly timey wimey…stuff.”

As with all time travel, you will find holes in the plot if you think it through. “If they could go back to X time and do A, why not go back to Y time instead and do B? Etc.” That said, Steins;Gate does make an effort to plug many obvious holes with restrictions on travel distance and by use of the many-worlds interpretation as a baseline.

Steins;Gate has so much quality work that I haven’t the space for it all, such as the other aforementioned cute girls. Never mind the clever pop-culture references tailored to Japan or the West depending on the language track. Every time there is a chance for a joke, no matter how minor, they throw one in.

So, not only does Steins;Gate have an intricately woven plot with intense drama and emotion, it’s funny too. Really couldn’t ask for more. Other than greater clarity in the first few episodes, my complaints are too minor to detail. The next series has a great deal of pressure on its shoulders.

It is great to see more anime pay attention to camera placement and shot composition these days, and Steins;Gate uses cinematography to excellent effect. I like the art style with plenty of motion – considering the dialogue heavy nature, they could have been lazy and used static pans for most scenes, which they didn’t – but I do wish it had the texturing from the visual novel.

The big guns stepped up to the microphone. Okabe’s eccentricities, Daru’s waifu-love, Mayuri’s sweetness, all fantastic, and I feel a large part of that stems from the excellent script and characterisation. I preferred the English dub, as Okabe’s actor delivers an incredible performance – he has a greater range, more subtleties, more nuance, and more crazy. Excellent music with a tense, sci-fi edge. Love the OP.

A story of time travel that grows more intense with each episode. The characters make Steins;Gate enjoyable; the plot makes their lives interesting.

Recommendation: A must watch, regardless of personal preference. Steins;Gate is something new, something different to the anime medium, so you can never be sure if this isn’t for you until you watch it.