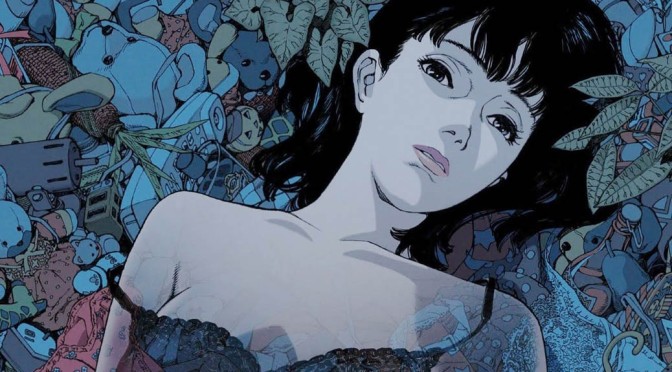 Perfect Blue is the first in Satoshi Kon’s line-up of films, and what a directorial debut it is. It tells the story of a woman pushed to the edge of her wits under the fanaticism of celebrity worship culture, taking the audience to increasingly disturbing places.

Mima is a pop star in an idol group, but after moderate success, she wishes to try something new, reach greater heights as an actress. However, her more rabid fans don’t take kindly to her change in direction. It isn’t long before the dead calls start. Then the threatening faxes (only in Japan would it be fax instead of email) and creepy letters. An online blog chronicles her every action, even impersonating her.

For the longest time, whenever I hear of a fan stalking a celebrity, Perfect Blue is what I think of. The feel of the show starts quite tame, by design, but one can always sense that unease, that certain something which indicates there is more below the surface. And sure enough, it isn’t long before Mima’s mind begins to break. She gets cast in a sexually charged crime drama, blurring the lines between reality and psychosis. Each scene seems somehow more disturbing that the last. Truly, if you are one who dislikes disturbing films such as A Clockwork Orange and Silence of the Lambs, this anime isn’t for you.

As the scenes grow more disturbing, so too does the editing; Kon, as a genius of editing, knows exactly when to cut the camera for maximum effect, his transitions on a skill level few directors can match. In several scenes, the narrative and music builds and builds, leading us to the scene’s zenith, but just before it reaches that point, Kon suddenly cuts to the next scene, yanking us in a different direction. This isn’t like a jump scare. Rather, it’s a shock to the emotions, yet well crafted that it doesn’t lose the audience. Each edit blurs reality further and further.

After I bought all that the store had of the anime Orphen, I had enough credit left for one more DVD and didn’t want just one DVD of another series, so I bought Perfect Blue, the one anime film they stocked. I was a fourteen maybe fifteen-year-old kid and I had no idea what I was getting into. With its sexual and violent nature reliant on psychology instead of gratuitous shock, Perfect Blue disturbed me and I couldn’t appreciate how good it was until years later. Now, I see it as one of the all-time greats.

Though Perfect Blue doesn’t have the vibrancy of Kon’s later works, it is excellently animated and rendered. The editing is outstanding, an exemplar in how editing makes a difference to storytelling.

Great acting in Japanese. The English is decent, but not great. Some lines sound stilted – the actors recorded one at a time can be noticeable and the depth of voice placement in the scene is off at times. Little music outside of the idols’ pop tracks, unless in times of tension. The transition from silence to sudden, Hitchcock-like music is jarring in the right way.

A commentary on celebrity obsession as an idol faces the worst her career has to offer. Tense, disturbing, excellent.

Recommendation: A must watch unless you don’t enjoy being disturbed. Also make sure to check out Kon’s other anime films, Paprika and Millennium Actress.