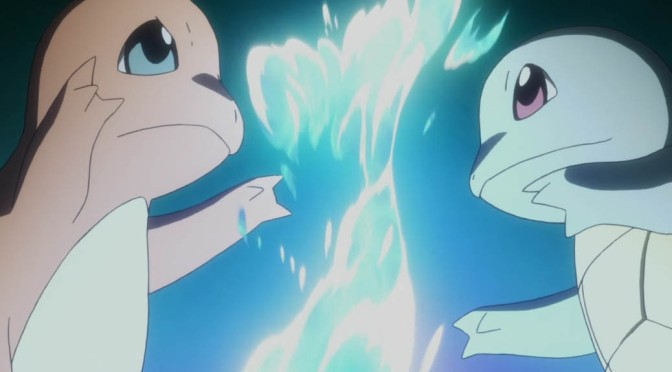 I have a special loathing for the Pokémon anime series. I hate how that show squandered the premise with its repetitive nature that hasn’t gone anywhere in nearly nine hundred episodes. A proper Pokémon adventure with serious battles, serious conflict, and not the Jesse and James kind every episode, would be excellent. But no, we have to endure Ash, a character-less dweeb, as he fails endlessly at becoming a Pokémon master.

So, is Pokémon Origins the series I had been waiting for? Yes, but no. Its length, of course, limits the grand adventure I had in mind. Each episode focuses on key points in Pokémon Red & Blue, much of the adventure summarised in segments between events. If you haven’t played the games, these summaries won’t mean anything to you, as they give little context and blitz through them – Red earns two badges between episodes one and two, for example. That said, when the narrative does slow down enough for us to enjoy the details, Origins is a good anime.

We follow optimistic, yet naïve Pokémon noob Red on his quest to complete the Pokédex. (How Professor Oak, a guy with an empty Pokédex, is called the Pokémon Professor will always be beyond me.) He chooses Charmander while rival Blue (Green in Japanese to match their release. Also, not as much of a douche as Gary, though still arrogant) picks Squirtle.

My favourite element of Pokémon Origins is how close it sticks to the games. The music when he encounters a Pokémon or beats a gym leader is just like in the game, only not 8-bit. Furthermore, the Pokémon don’t say their own names, instead uttering animal noises. He receives HM01 Cut from the SS Anne captain, the bike ticket from the fan club president, and they even gamify several elements – a new game starts at the beginning and he saves at the end of each episode, Gameboy graphics and all. The only inaccuracy comes from mega evolutions. Naturally, all of this will mean nothing to those who don’t have a fondness for the games. Origins is very much a nostalgic throwback.

If you haven’t played Red or Blue, Origins is still a good introduction to the franchise, as it details the mechanics (according to the games), though does become a bit exposition heavy as a result. Don’t go on to the main series expecting quality, however.

Pokémon Origins accomplishes more in four episodes than the main series has in hundreds. If only they had created a full season, maybe several on this level.

Much higher quality and animation than what is found in the main series – probably the best-looking Pokémon anime. The ability effects for fire, water, etc. in particular are great.

Better acting than the series in every way, and is good in either language (same team as Sword Art Online for English). Hearing the classic games’ music, used at the correct moments, floods me with nostalgia.

A near-exact replication of the Red & Blue story from starter selection to facing Mewtwo after the championship. However, with only four episodes, most of the narrative is rushed in summaries.

Recommendation: A must for fans of the games. If you haven’t played Pokémon Red or Blue (or Yellow), you are unlikely to get the full enjoyment out of Pokémon Origins.