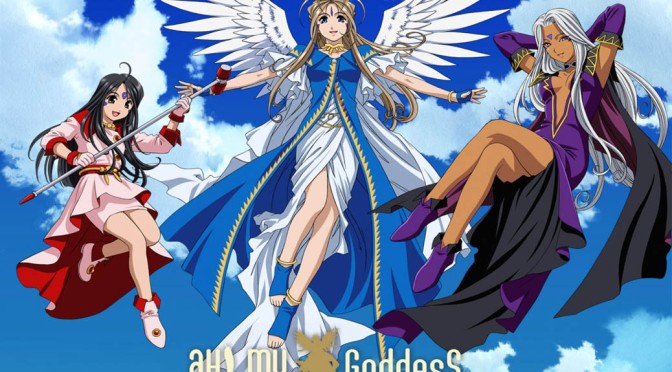 We re-join Keiichi and Belldandy a year into their relationship, still advancing at that familiar glacial pace. Urd continues to encourage them while Skuld does her best to interfere. These jokes were enjoyable in the first season, but now I find them tiring. Kei and Bell’s relationship is at a standstill. Where Keiichi’s shyness was once amusing, it has become frustrating. Furthermore, the fact that Belldandy barely participates in the narrative results in an altogether disappointing season.

Now, Flights of Fancy isn’t all bad. The first few episodes are good, for they have some actual conflict (covers the second half of the original OVA) and Kei and Bell are the focus. Similarly, in the final few episodes the couple faces a decent dilemma. It’s most of the in-between that bothers me. Filler, that is what it feels like. At least we get to see Belldandy drunk on cola – cutest drunk ever.

You can either take or leave Ah! My Goddess: Flights of Fancy. I enjoyed the start, the end, and a smattering in between; however, if it doesn’t sound appealing, skip straight to the movie.

Same beautiful art as season one.

The acting is still good and new Celtic music brings nice changes to the soundtrack. However, the weaker script that repeats many of the same jokes from season one lets the team down.

It’s the disappointment factor and the weakening of Belldandy’s character that hit me the hardest, but the heart is still there, and I did enjoy at least ten episodes.

Recommendation: Only for fans of the first season; then again, maybe not – disappointment hurts the most.

3 thoughts on “Ah! My Goddess: Flights of Fancy – Anime Review”