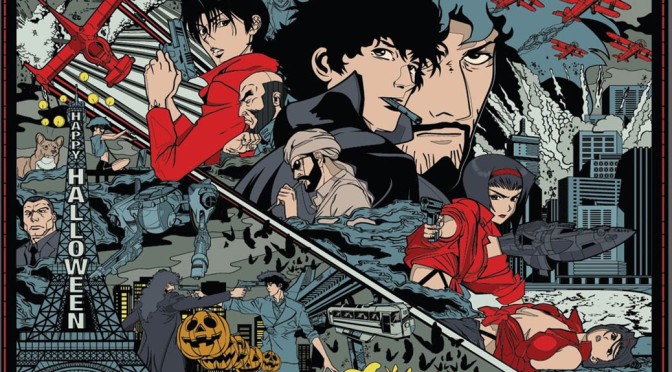 The Bebop and its ragtag crew are back again, this time on the hunt for a hacker in possession of a biological weapon. The price on his head? 300 million Woolongs, the highest bounty ever offered.

In short, Knockin’ on Heaven’s Door is an extended episode of Cowboy Bebop with all the key ingredients: Great characters, world building, an attention to detail, and action. However, the movie does have a few problems. First, the lack of humour. Yes, we do get some from Ed and Ein, but I feel as though the overall Bebop ‘energy’ has been drained somewhat. Furthermore, the intensity isn’t the same as found in the episodes against Vicious in the series, so it isn’t as if they traded humour for intensity.

My second issue is with the grounding of the setting. The city where most of the tale takes place feels too normal and doesn’t have that adventurous quality I loved in their other destinations.

Now, some areas have improvements. The villain is more interesting than Vicious from the series, for he has a proper backstory and motivations. Then we have the action. The melee fights and sky duels are better than ever – Spike has the freedom to unleash his inner Bruce Lee and Hans Solo.

I would rank most Cowboy Bebop episodes above the movie, but that is like comparing something excellent with another thing not quite as excellent. Cowboy Bebop: Knockin’ on Heaven’s Door is still a fantastic ride.

The art has the same superb quality as the series, except on a higher budget for grander scenes and detail.

Again, expected high quality from before. The movie plays a more lyrical soundtrack – less jazz, more country and rock. Watch in English or nothing.

An extended adventure against the greatest threat the Bebop crew has ever faced. More action, less humour.

Recommendation: A must for Cowboy Bebop fans. Without the series, you won’t enjoy Knockin’ on Heaven’s Door as much – what are you doing not watching Cowboy Bebop anyway?

One thought on “Cowboy Bebop: The Movie – Anime Review”