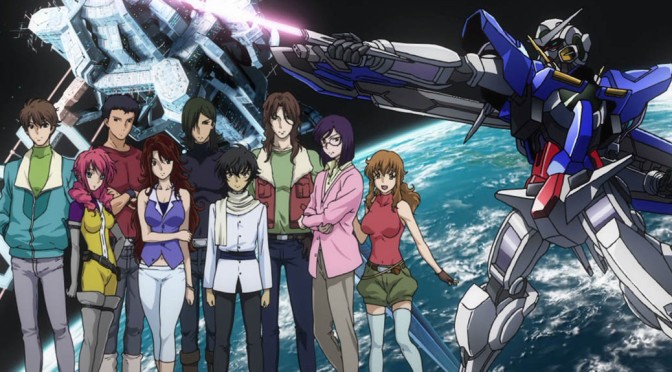 In the year 2307, fossil fuels have depleted and the world has turned to solar power by building three orbital elevators to a ring of solar arrays in space. The world’s three alliances control an elevator each – Union (Americas), Human Reform League (most of Asia), and the AEU (Europe). However, smaller nations such as those of the Middle East don’t benefit from the arrays, forcing them into war for energy. Furthermore, the alliances secretly increase their military strength in defiance of the treaties. An independent group known as Celestial Being appears, intervening in wars and crushes all sides with the goal to end all conflict. They have the most powerful mechs the world has seen, allowing four Gundam Meisters to take on armies.

One of the best story pitches ever. Gundam 00 engaged me within minutes and kept the frames turning until the very end, despite its flaws.

We have a bloated cast here, but the focus is on the Meisters, Tieria, Allelujah, Lockon, and Setsuna, who receives the most screen time due to his Middle Eastern history. It’s a shame that he’s the dullest character. He barely says anything nor does he emote at all. He’s supposed to be the strong silent type, but delivers the bland nothing type. His archetype has a fine line between great and rubbish – I never find anyone in between. See Full Metal Panic’s Sagara (similar backstory to Setsuna, interestingly enough) for how it’s done.

The other pilots are good, Allelujah in particular with his split personality; however, while each pilot does have a short arc to illustrate their motivations, outside of those arcs, they lack interpersonal conflict, except Setsuna, for his birth country is at the centre of the main conflict. His plotline looking at child soldiers, religious fanaticism, and political conflict in a war-torn nation is interesting, but he isn’t.

Much of the cast bloating comes from a Chinese celebrity who helps fund Celestial Being, which the camera cuts to every episode, but all she does is sit there with a servant and make innocuous comments. Similar situation with uni student Saji and his girlfriend Louise; they serve to show the conflict from a civilian perspective without any effect on the plot until season two. Saji’s sister, a journalist reporting on Celestial Being, is more interesting and her investigations have conflict and tension that adds to the narrative. Saji and Louise should have been peripheral to her thread until needed.

Some dialogue made me cringe as well. Saji has to ask all the stupid questions on the audience’s behalf, though no one watching is that dumb. Setsuna (yet again) repeats barf-inducing line such as ‘I am a Gundam’ a dozen times throughout. I also hate the telekinetically linked dialogue thing they do – several people from different corners of the world, in no contact, finishing each other’s sentences by coincidence. Trying way too hard to be dramatic.

So, with these problems, how did Gundam 00 keep me watching? It’s because of the overall conflict. No faction misses the irony of using war to prevent war; the whole premise would have fallen flat if everyone had accepted Celestial Being as a great idea. In fact, a superpower uses Celestial Being to defeat an opponent, knowing they would have to interfere according to their own doctrine. Celestial Being has to intervene, always, regardless of which faction is in the wrong. The political game of RISK and its effects on the world economy and power is great to watch, and the best part of Gundam 00, coupled with intense action and a perfect pace.

Gundam 00 has its share of flaws, I grant you, and yet I have no qualms about recommending it anyone. Of course, if Gundam in general isn’t for you, this won’t be the series to convince you. For everyone else, get ready for an intense conflict that begs a marathon.

Movie: A Wakening of the Trailblazer – I get the impression the writers had no idea how to conclude such a strong opening premise. How does one end a story about achieving world peace? Well, world peace is out, since it isn’t realistic in any universe, but if it ends with more war, the audience won’t feel satisfied. So, what does one do? I’m not sure, but it certainly isn’t what A Wakening of the Trailblazer went with. The movie is rubbish. If the character names were changed and you didn’t know this was a sequel to Gundam 00, you wouldn’t guess they were related. Not required viewing. Movie Quality – Low

Beautiful art, especially with those particle effects. Battles boast great choreography without resorting to repetition of animations. I love the mech designs, possibly my favourite in all of Gundam. Improves with season 2.

Really, the Gundam series in general has excellent acting in English from Ocean Production studio (Black Lagoon, Death Note, most Gundam dubs). No exception here. I enjoyed the OPs, and the music in general is good, but it doesn’t live up to the likes of Gundam SEED.

An incredible start to a global conflict, unfortunately, distracted from by side characters brought in too soon and an episode that nukes the fridge in the second act. Too little character conflict and a one-note protagonist weakened my engagement to the individuals.

Recommendation: A must for fans of Gundam action. Even with a few weak aspects, I found Gundam 00 thoroughly enjoyable for its sharp action and production quality. I watched all episodes within a few days.