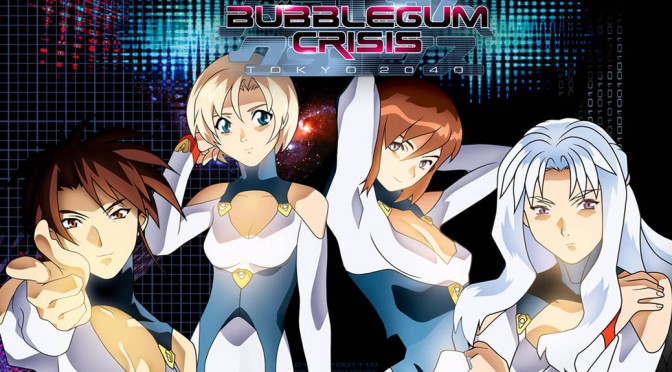 Similar: Ghost in the Shell

I came across Bubblegum Crisis Tokyo 2040 by chance while watching SBS (Australia’s international channel) over a decade ago. In the late night block, they had a glorious trio of anime series: Cowboy Bebop, Evangelion, and Bubblegum 2040. While Bubblegum 2040 was the worst of the three, I still made sure to set aside the time to watch it along with the others. I loved the vigilante women in power armour. So, how does it hold up after all these years? Let’s find out.

In response to a mysterious earthquake that crushed Tokyo, the Genom Corporation created organic robots called Boomers to rebuild the city and replace many lower level service jobs. However, some Boomers have been going rogue, mutating into cybernetic monstrosities that attack indiscriminately. Enter the Knight Sabres, a quartet of women in power armour led by beautiful Sylia Stingray, daughter of the Boomers’ inventor. The other three women are Priss the bad girl rock star, Linna the hardworking country girl, and Nene the plucky police officer. Genom, trying to suppress the flaw in their product from the public, doesn’t look at the Knight Sabres favourably and neither do the A.D. Police, jealous of vigilantes doing their job for them.

The characters are solid, fleshed out and have enough drama and flaws to make them interesting as they balance vigilantism against ordinary jobs and personal matters. Like the characters, the story isn’t groundbreaking, hitting many of the standards in cyberpunk sci-fi such as pleasure robots, philosophical questions about robot consciousness, and corporate overreach. Hell, the Genom CEO is an old man stuffed with cables hooked to an electronic throne atop a skyscraper. Even though these tropes are common to the likes of Ghost in the Shell, Blade Runner, A.I., and many cyberpunk works, Bubblegum 2040 uses them well to create a fun action series with girl power. There is also enough in the philosophical questions and drama (one of the A.D. officers has a crush on Priss – drama!) to prevent the action from becoming repetitive and blending into one.

I know that if I hadn’t watched this all those years ago, I wouldn’t have given it a second glance today due to its age. That is why I urge you to give Bubblegum 2040 a shot in spite of its aged visuals, just as I would want someone to urge me if I hadn’t seen it. Bubblegum Crisis Tokyo 2040 is what I describe as the most solid of the solidly good series; it plays it safe and delivers its promise on the tin.

Dark visuals to match the cyberpunk setting, and the Boomers and Knight Sabres look cool. The budget animation is noticeable, however. In establishing shots, background characters are frozen and action scenes often use streaks and action flashes (charge, swipe arc, flash, and damage with no transitions in between). All considered, the art isn’t poor, but if you need modern visuals, this won’t be for you.

The better voice track is up to personal preference, as both are equally good. When Priscilla sings, the lip flaps are out of sync in either language, strangely enough. I thought the heavy metal and rock most appropriate to arse-kicking.

Bubblegum Crisis Tokyo 2040’s story is as straightforward as it gets – vigilantes fight robots from an evil corporation. Though this plot is not particularly deep, it hits all the right notes for an enjoyable viewing experience.

Recommendation: Watch this for solid sci-fi action with vigilante women tearing the cybernetic hearts from robots. Bubblegum Crisis Tokyo 2040 is an anime I like to watch when I don’t want to think deeply about the subject matter and just relax. It doesn’t have any grating problems to irritate either.