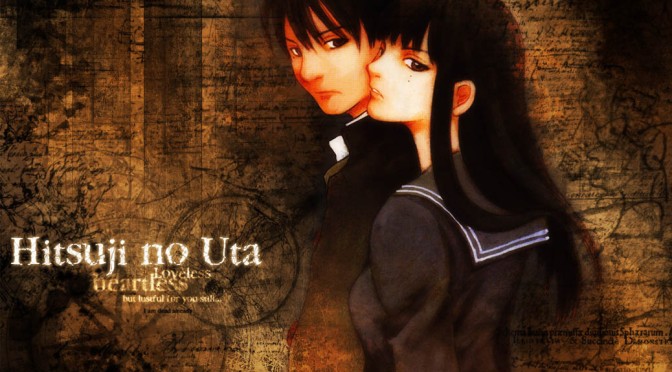 Vague, that is how I would describe Hitsuji no Uta. It opens with vague talk about Kazuna’s father, then talks about art with some vague meaning, until it moves onto his sister, Chizuna, who want to help control his urges. The first episode ends without anything of worth occurring.

Kazuna suffers from a thirst for blood, his family disease, and starts seeing blood dripping off people. However, the next episode, repeats the sequence (literally) in a vat of ambiguous dialogue. In fact, you could cut the first two episodes (that’s half the series), as the blood thirst sequences repeat, yet again, in the third episode where the vague purpose of the narrative finally enters the picture.

For a series only four episodes long, you wouldn’t think it possible to have such a slow pace and filler throughout. I am not exaggerating about the blood thirst scenes; they take up what feels like half the airtime. If they were going to give nothing of substance in any department, then why bother? Didn’t anyone look at the script and ask, “What’s the purpose?”

The conflict is worthless. Why is he afraid of drinking blood? When he does feed eventually, there are no consequences – feeding doesn’t kill. It feels like the writer just wasted our time. Then there are the relationships. Kazuna’s friend from the art club, Yaegashi, has a crush on him. Does it matter? No, because it goes nowhere, especially once the incest starts with his sister. Oh yes, I should have mentioned the incest, which is what this anime feels like a smokescreen for. The incest brings the least drama to the narrative, if you can believe it.

And bloody hell, the art. Hideous. The characters’ faces are lopsided in half the cells, and the eyes. The eyes! They are drawn concave from the side and actually bend inwards when the characters blink.

Hitsuji no Uta’s characters aren’t strong enough for a character piece such as this – I couldn’t even tell you their personalities. If you want an anime to fall asleep to, this is it; however, those eyes may give you nightmares.

Those lopsided eyes, fluctuating proportions and repeating sequences are painful to watch. They couldn’t be bothered to animate the mouths half the time (the characters just stare blankly), and the backgrounds are as dead as a mouse caught in a mousetrap, under an anvil, in an exploding volcano.

Much of the voice work sounds dead inside (not in the right sort of way) even with great actors like Tomokazu Seki (Sagara in Full Metal Panic) and Megumi Hayashibara (Rei in Evangelion) known for emotionally subdued characters. It’s likely to be the fault of the voice direction, as everyone sounds like that.

A student struggling with his thirst for blood isn’t a compelling tale when blood is readily offered from a sustainable source. It doesn’t help that the characters have no soul to them.

Recommendation: Not worth your time unless looking for a sleep aid. Hitsuji no Uta is an anime I can’t understand why they bothered making. It would have been evident in pre-production that the art and sound were poor, coupled with an empty story, so why green light the project?