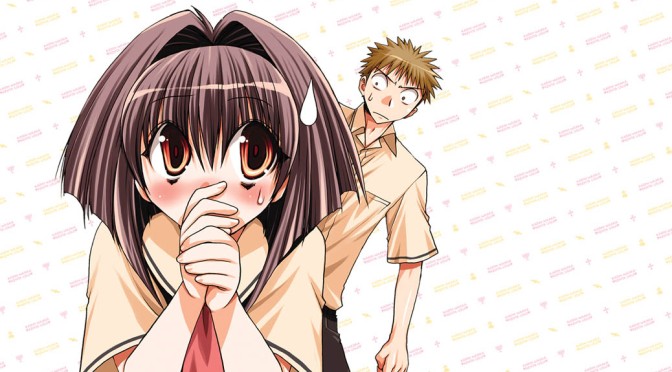 Karin is an unusual vampire. While the rest of her family drinks blood to survive, she produces blood to the point where it bleeds from her nose if she doesn’t feed it to humans. She’s an un-vampire, if you will. Matters complicate when new guy Usui joins the school and she starts producing more blood than usual around him.

When I say Karin has nosebleeds, I mean nose-explosions, nosebleed rainbows, literally. It’s nice to see that it’s the girl with the arousal nosebleed instead of the guy, as is usual; however, it doesn’t feel as though the writer put much thought beyond that into the narrative. You have your gimmick, what next? What makes the two work as a couple? Do they share any interests? Do you have any other jokes? Unfortunately, the answer to these sorts of questions is ‘I didn’t think of that.’

The plot is mostly about keep her blood level in control, hiding her vampirism, and her crush on Usui. There isn’t enough here to carry a story for twenty-six episodes; it would have been better at thirteen like most of these romantic comedies. Also like these budget romantic comedies, they force drama in the last few episodes at the expense of all comedy. While Karin may not be death-by-laughter hilarious, it’s still poor form to change genres in an attempt for emotion at the end. Those last few episodes are Karin’s worst.

I find Karin to be an ultimately forgettable experience. It isn’t the worst anime I have seen but nor does it have anything noteworthy.

Mediocre character design; weird face art with a straight line from chin to nose tip. Minimal animation, as most shots have no more than a character’s mouth moving – budget visuals. Similar situation with the backgrounds using a watercolour style, but since there is no motion it looks like the characters are on a stage, not in the world. Every scene transition uses a tile wipe with the same awful jingle.

The dub is quite bad. Karin sounds stilted; when moving from one sentence to another, she often doesn’t pause as though punctuation is missing. Lacks emotion. The mother’s British accent is atrocious. The original Japanese VO isn’t much better with those ear-grating squeaky voices. Repetitive comedy jingles for music.

Having the girl get explosive nosebleeds instead of the guy is a humorous reversal of an overused trope, but Karin’s romance between a vampire girl and a human falls flat under its meandering pace and hollow characters.

Recommendation: Karin may be amusing if you don’t care about depth and just want to watch something that takes no thought. The comedy isn’t strong enough to carry this anime.