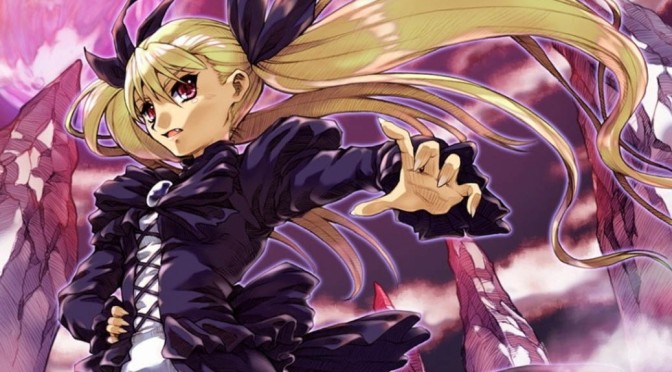 Mina Tepes, daughter of Dracula and queen of vampires, wants to setup a vampire district island in Japan in exchange for paying off the national debt. However, government officials and other vampire clans resist her play for power. High school student and werewolf, Akira, fights as her bodyguard against assassination and is her whipping boy.

Dance in the Vampire Bund is confused about what type of story it wants to tell. Take the first episode, which follows a panel show of “experts” (celebrities, a professor, and two presenters) discussing the myth of vampires and if they exist based on a series of recent deaths. The segment is amusing, as the panel presents the same drivel that they would say in real life. This sets a mystery case vibe, only with guests instead of detectives. However, vampires burst on stage before long and the second episode moves onto a high school teen romance. Mina joins Akira’s high school, where they fall for each other instantly while another girl, who has had a crush on him for, like, evah, gets jealous. Alright, it’s a high school show, got it. No, wait; it then becomes a political narrative between different clans and the Japanese government. Hang on, it’s now has an action slant when a squad of vampires infiltrate the school and attack the student body. Learn focus, for blood’s sake!

Protagonist Mina is also at odds with the tone. Are we supposed to take a prepubescent girl seriously as vampire queen? Why did she stop growing at twelve? If her ageing were to stop at a given point, wouldn’t it be at the human prime around twenty? This just sounds like an excuse for creepy Lolita. She doesn’t have a psychotic personality with the mentality of a child or a maturity betrayed by her appearance. She’s pedobait, nothing more. The creators took any excuse to have her strip. Her hidden power is to grow older with huge breasts, fighting naked, for some reason. She’s not Alucard, where armour wouldn’t make much of a difference since he can regenerate from any damage. Mina however, is easily wounded and not that durable. And why not stay in adult form if it’s more powerful? The design stupidity baffles me.

Furthermore, Mina treats us to the most amateur political manoeuvring that has no subtlety, no understanding of the political landscape. For a queen of an ancient race, she sure is incompetent. Also, the prime minister can somehow dissolve parliament? Okay… That is the dumbest attempt at politics I have ever seen. The writers didn’t need to be so absurd; all they had to do was have a political party opposed to the vampire zone. Too much effort?

Dance in the Vampire Bund is an anime too busy with random camera cuts to have any depth to its plot. I am disappointed they didn’t make it a crowd sourced supernatural murder mystery. It would have been far more interesting to have Mina as a mysterious (and mature) vampire working from the shadows, unseen until late like monster films. Shame.

Desperate to emulate Bakemonogatari in visuals, forgetting what made the odd style work over there (they share the same art director). The cinematography tries to be interesting by cutting away to random parts of the environment and an overabundant number of close ups on anatomy – eyes, mouth, ear, etc. except, there’s not much worth looking at and serves no purpose but distract you from how mind-numbingly dull the dialogue is. Screens of yellow or red flash randomly, often during action – we see the swing, then the damage, no impact in-between. Why? Haven’t the foggiest. Characters are too shiny; they look laminated.

The voice work sounds tired in Japanese and is only a little better in English. Lacks emotion. You can’t get any personality from their voices beyond the archetype clichés. Music is too low at times and gets repetitive.

A Lolita vampire queen setting up a new city for vampires isn’t an interesting premise, and the execution didn’t help either. Dance in the Vampire Bund has no soul to it, nothing memorable.

Recommendation: Skip it. Dance in the Vampire Bund isn’t good for an action anime or a vampire anime. This anime has nothing to say.

One thought on “Dance in the Vampire Bund – Anime Review”