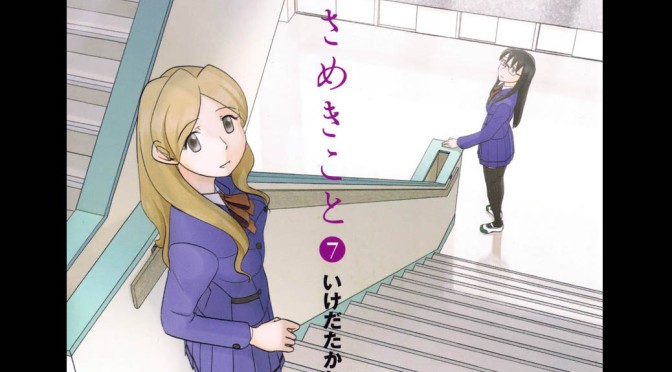 Kazama has an endless string of crushes on cute girls, each confession as thoroughly rejected as the last, unaware of her best friend’s feelings for her. Sumika is athletic and thinks she isn’t cute enough for Kazama, and worries how her confession of love would affect their friendship. Along with another lesbian couple, they form the school ‘Girls’ Club’ – by girls, for girls, about girls.

There is also this subplot about a boy in class who has a crush on Sumika, but he figured out she is into girls, so he starts cross-dressing to get her attention. He also accidentally becomes a girl idol (he’s apparently cute in a dress), an idol Kazama has the hots for. In short, everyone has a crush on everyone.

For the most part, Sasameki Koto follows the club members hanging out and doing regular school activities as Kazama fantasises about having her first kiss, and Sumika suffering through her seeming invisibility. While humorous and enjoyable to read, most chapters don’t further the plot. You could skip half and not miss anything, which in a manga nine volumes long is a considerable amount. Sasameki Koto is good half the time, padding the rest.

In the end, Sasameki Koto is enjoyable, but a lack of depth and the stalling of the main relationship make it difficult to keep turning the pages. Recommended in small doses of a volume at a time.

Noticeable shortcuts – many panels are missing faces and other detail discrepancies.

Half good, half filler.

Recommendation: Try it. If you don’t mind a heavily padded story then give Sasameki Koto a shot.