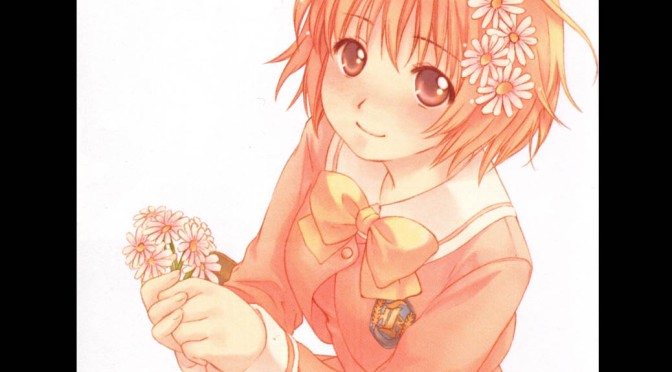 Hazumu asks Yasuna out, but since she’s a lesbian, she has to say no to him. That night, aliens crash-land on Earth, right into Hazumu, though they are nice enough to repair him. However, due to a complication in the repair process, he was turned into a she, becoming world famous for his alien abduction. And so, Hazumu must adjust to life as a girl. Of course, Yasuna is suddenly in love with him/her now, and his/her friend Tomari doesn’t like the change because she had a crush on him as a boy. Tomari protects Hazumu from onlookers and gossip.

The premise of a guy turning into a girl by aliens should have made for a hilarious story. Unfortunately, other than Hazumu’s alien obsessed family, much of the comedy stems from Hazumu going full retard once female as if he had never seen a girl in his life. He thinks girls strip willy-nilly when a boy asks. A bra? A BRAAAA?! What is this contraption? Get that heathenistic device away. Away, I tell you!

The plot is packed with every Japanese high school event cliché – pool chapter, beach chapter, festival, cooking, etc. – and doesn’t even use the gender-bender angle to affect these clichés. The characters are also shallow and dull, making for a mundane love triangle void of meaningful conflict. Hazumu has no personality; Yasuna is just a walking first-world problem girl.

Despite my negatives, Kashimashi isn’t awful by any means. I simply found it underwhelming, though your experience may differ.

I like the backgrounds and use of texturing, but the character design is poor. They all look ‘doughy.’

Pathetic characters impair the limits of the premise.

Recommendation: Try it. If you can accept the characters, Kashimashi: Girl Meets Girl may entertain you. Or you may laugh at their idiocy.