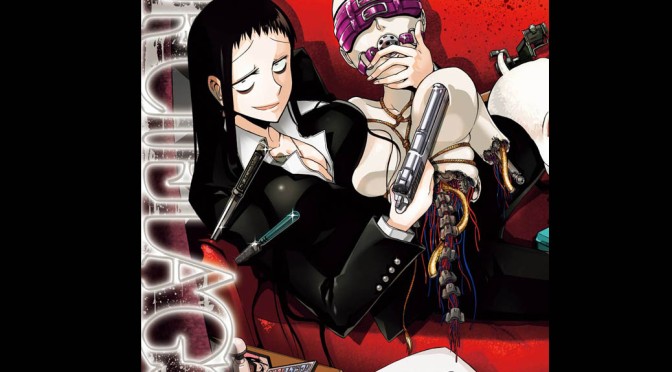 Meet Kuroko, a serial killer responsible for over 700 deaths and new employee of the police to deal with other dangerous criminals. Along with her young handler, Hinako, they drive around the city in a Lamborghini Murciélago (hence the title) to hunt the most psychotic of bad guys. Luckily, Kuroko is more psychotic than any of them and Hinako, despite her cuteness, isn’t flustered by the excessive violence; she’s more concerned with how much Kuroko’s damages will cost the city. Kuroko is certainly one of the stranger manga characters out there and a yuri nymphomaniac.

Murciélago is for those who like violent action mixed with dark humour. There is even a murder party where all the scum and villainy are invited. I found it humorous.

Outside of its art, Murciélago’s greatest strength is the insane premise. Criminal hired by the police isn’t a new concept, but I have never seen it employed in such a psychotic manner. Murciélago never takes itself too seriously, which is great for the humour; however, I do worry that it will hinge too much on ‘weirdness’ in the long run, losing depth as a result. That said, three volumes in and it looks good.

A serial killer who kills other criminals with dark humour and whimsy? Entertaining.

Recommendation: Read it. If you can handle gore and excessive violence, then Murciélago is worth your while.