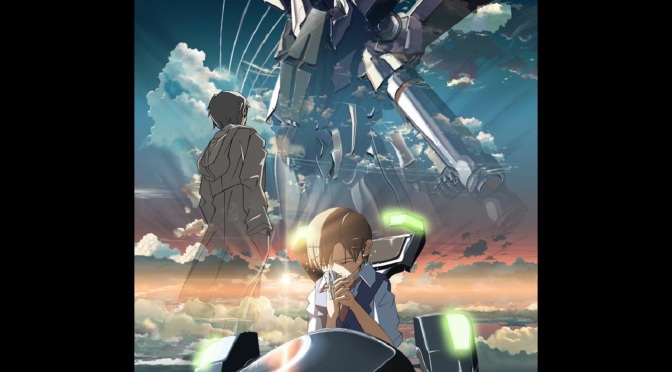 The Place Promised in Our Early Days (same director)

The Garden of Words (same director)

Having recently watched Nolan’s Interstellar, I was reminded of Voices of a Distant Star, first anime feature of director Shinkai Makoto (of Garden of Words and 5 Centimetres per Second fame). Both Interstellar and Distant Star make use of time dilation to create drama with its characters. Distant Star tells the story of a fifteen-year-old girl who joins the space fleet in the fight against aliens, leaving her boyfriend behind on Earth with text messages as their only means of communication. The further she travels into deep space, the longer messages take to transmit – days, months, even years – and because of relativity in light speed travel, a couple of days for her is equivalent to years for him.

This story is a tragic one dealing with love separated, literally, by time and space. Distant Star is a powerful piece when it hits its emotional highs; I felt for these two characters. Unfortunately, the side story of the galactic conflict distracts from these heartstring moments. The writer needed a catalyst to launch the girl into deep space, there’s no disputing that; however, a galactic war isn’t a small plot point. It needed more time and space, so to speak, to develop into a full-fledged plot line. We get no backstory on the war, no information about the aliens, and nothing on how the girl became an elite pilot so quickly. (Aside: How is she allowed to wear her school uniform in the mech? I am guessing that it’s a metaphor for her wanting to be back with him during their school days.)

Shinkai could have chosen a simpler premise such as the exploration of distant stars to act as the catalyst rather than a war. This would allow more time to focus on the relationship. All we know about these characters is that they are in love. We know nothing about their interests, strength or weaknesses – who they are, really. Then again, they could have extended the runtime to explore each aspect in depth; at 25 minutes, Distant Star is too short for what it tries to achieve.

When it comes to the art, the war causes more problems. Poor CG was used for the mechs and their alien opponents, which is nothing but jarring, and it doesn’t help that their designs are awful. The cockpit view is cool though, using a lone seat with controls floating in a holographic interface.

Despite all that I have said against Voices of a Distant Star, I enjoyed my time here. The premise alone was worth a watch, and even if you don’t enjoy it, the short length means little time is wasted.

Beautiful environments and lighting unfortunately tarnished by jarring CG for the hideous alien and mech designs. The character art seems to be in its draft stage.

Decent voice work in Japanese, monotone in English. I understand that when people are sad, they speak in sombre tones, but full monotone sounds dull. There are no moments of negative energy, no passion in the words. Half the music doesn’t fit the theme. Also something off about the Foley sounds at times.

A tragic story of long distance love amid a galactic conflict, which results in neither aspect getting the development they deserve.

Recommendation: Worth 25 minutes of your time for what it does right. Voices of a Distant Star is a nice piece of anime that could have done with a longer runtime to develop the relationship and the war further.