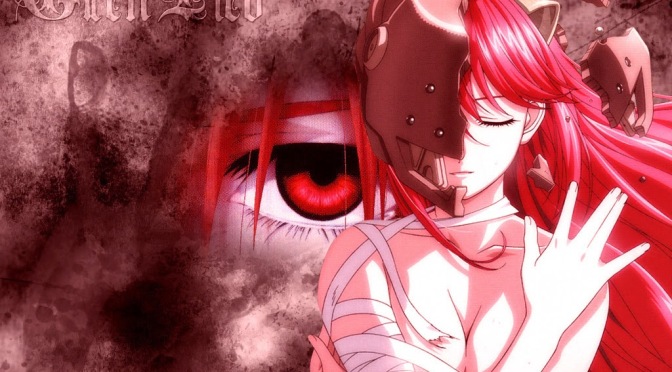 Similar: When They Cry

A severed arm twitching in a pool of blood. Decapitated heads sail across the room, blood sprays the walls. Screams fill the air. At the centre of the carnage, a young girl, naked. Don’t be fooled by the innocent looking girl; Elfen Lied is violent and bathed in gore, not an anime for the faint of heart.

In the world of Elfen Lied (German for ‘Elven Song’) exists a race known as Diclonius. Human in appearance other than small horns protruding from the skull, Diclonii control telekinetic arms called vectors capable of tearing people in two with a flick. Their purpose is to eliminate humanity and spawn a population of their own. Lucy, the protagonist, is one such Diclonius, who escapes from the laboratory, massacring guards and researchers on the way out. She ends up on a beach in front of Kouta, the male love interest, and his friend Yuka. Her mind traumatised by a gunshot, Lucy now lies dormant, replaced by Nyuu, an innocent alter-personality with the mental development of a child. The laboratory dispatches other Diclonii and a mercenary to hunt Lucy down.

Elfen Lied is an anime of tension. It juxtaposes the young innocence of the characters with the violent nature of their telekinetic powers. How can something so small be so psychotic? Every scene with Nyuu is tense, for she could snap at any moment. A mere second of lost control and a character loses a limb or their head. A Diclonius doesn’t discriminate. Man, woman, child – all die in Elfen Lied. Elfen Lied is brutal and gory, contains child and animal abuse on physical and emotional levels. Do not watch this if you are prone to nightmares.

Nyuu/Lucy duality brings an interesting dynamic to the story. While her innocence is what keeps the power at bay, it is also her greatest weakness, as she is too naïve to control her power. It reminds of the 1931 Frankenstein film (which I highly recommend, by the way) where the monster doesn’t comprehend that actions have consequences, especially when those actions can be so destructive. Elfen Lied explores the nature of humanity, and what can come from it when a child is isolated, abused, and pushed to the limit. It accomplishes this goal rather well.

Music enhances these moments where a character’s psyche breaks and violence paints the screen. The opening is a tragic Latin opera called ‘Lilium,’ set to bizarre symbolist art inspired by Austrian painter Gustav Klimt. The hymn unsettles, a warning for what is to come. Several versions of ‘Lilium’ play throughout the series and are an important role in the narrative.

Unfortunately, that’s where the positives end. Outside of the Diclonii, the rest of the characters are either underdeveloped or dull. Kouta in particular is weak. While his backstory is good and ties with Lucy’s plot line, as a character he has no purpose other than to serve as a romantic device. He is just so dull. A street lamp with a blown bulb would be more interesting. Yuka is even more useless. She is nothing more than the third point for a love triangle. The writers could have cut her from the series with no effect on the plot. The romance between her and Kouta is lame, filled with generic misunderstandings and anime romance tropes. What little humour Elfen Lied has is trite, seen in every anime teen romance – trip over each other, grabbing the breast, up-skirts, etc.

The average voice acting doesn’t help either. Even though Japan records all actors at once, here they sound stilted with no interactions off each other. The dub is even worse. Kouta’s voice actor is as deadpan as the character, and the female actors tried too hard to imitate their Japanese counterparts, resulting in these awful squeaky voices. No child sounds like that! What’s strange is that the English cast has done great work elsewhere (same team as Full Metal Panic and RahXephon, both great English tracks), but here they sound like amateurs.

Despite all Elfen Lied does wrong, I enjoyed the story. It’s a great example of using gore to enhance the narrative surrounding innocent characters.

Mouth movements comprise all the animation in most non-action scenes; sometimes, even the mouth doesn’t bother, too exhausted it seems. Other than the action scenes, visual details are low. The manga creator intentionally chose a ‘moe’ artist for the anime to enhance the contrast between innocence and violence. However, this style doesn’t look the greatest, especially on Kouta. Gore and action is great.

A great Gregorian chant-inspired soundtrack and tension music brought down by an average Japanese voice track, and an even worse English one.

Protagonist Lucy carries the violent narrative with her dual personas and volatile nature. Shame then that the other pieces of her love triangle are worthless.

Recommendation: Elfen Lied is a worthwhile anime for fans of uncensored violence. Watch in doses of three episodes at a time to avoid exhaustion from the constant tension.