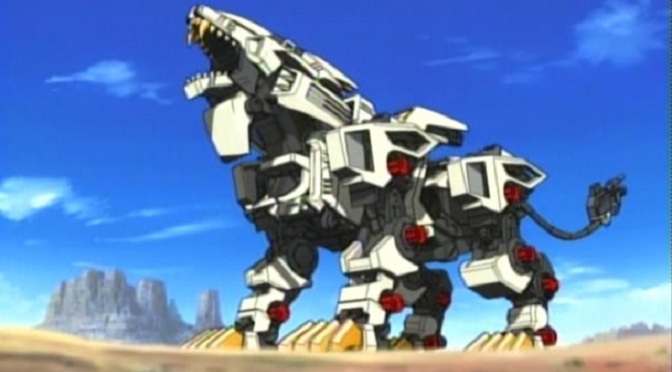 I first watched Zoids New Century during its release stint in English. My younger sibling was obsessed with the show, which inadvertently got me interested in the series – not that I had a choice with only one TV in the house as a teen. Watching it again a decade later for review, I wasn’t expecting much. I theorised that any positive opinion I had regarding the anime was likely nothing more than nostalgia. Battle anime aimed at a young audience don’t incite high hopes. However, it turns out that Zoids NC is a good show, far better than anticipated.

Zoids New Century is set 4000 years after the classic Zoids series, and other than the use of robot Zoids, the two series have little in common. Where the classic had an adventure narrative, New Century is closer to traditional battle anime with fights lasting an episode or two – this is one of Zoids’s strengths; the fights don’t drag on for a dozen episodes each. In its twenty-six episodes, Zoids has more battles than Dragon Ball Z does in a hundred. These battles centre on protagonist Bit Cloud, pilot of the Liger Zero, and his supporting pilots Brad the mercenary, Leena the rage machine, Jamie the timid tactician, and Doc Toros the Zoid engineer. Together, they make the Blitz Team.

The premise is simple. Teams fight against each other in sanctioned battles, usually 3 vs. 3, though it varies on occasion. Bit infiltrates the Blitz Team and steals the Liger Zero, a temperamental Zoid that refused to allow anyone to pilot it due to its stubborn and impetuous AI. After winning a battle for them, the team allows him aboard (not before Leena rages at him for taking the spotlight in the battle).

The battles have good variety with each opponent bringing their own strengths to overcome that shape the battle’s theme. While not overly strategic, each battle has good back and forth, and not the typical smash faces together until someone wins. The main flaw is that dumb luck wins a few fights early on, but this isn’t a big problem. It also helps that the characters are fun. Sure, they may not have incredible emotional depth or tortured souls, but they bring life and enthusiasm to the narrative, especially in the English voice track, and don’t have anything stupid about them.

The narrative never gets heavy handed, keeping its focus on the battles. Even when the villainous Backdraft Group comes in (similar to Team Rocket – not Jesse and James) humour remains with their focus on cheating to win, even so far as to bring in their own snarky robot judge to favour the villains. Harry Champ, a man destined to be king, is a hilarious antagonist, who keeps trying to defeat Bit with his expensive Zoids because he thinks Leena is Bit’s girlfriend, and Harry has the hots for her.

The creators knew what made for an engaging battle anime and stuck to it. While Zoids is safe, it works and is an enjoyable watch.

Zoids makes great use of CG for the mechs, blending them into the standard art, one of the early examples to do so successfully, even if repeated on occasion. At first, you may notice the CG, but it doesn’t take long to fade.

Battle sounds and Zoid roars work well. Ocean Group (Vancouver studio known for Black Lagoon and Gundam) did a great job with a strong cast of actors that brought out their personalities much more than the Japanese had. Bit and Leena in particular have much greater range and emotion.

Though safe, the characters are good enough to carry the show and bring life to the narrative.

Recommendation: A good show for anyone looking to have fun with a fast-paced battle anime about dinosaur robots beating the snot out of each other.