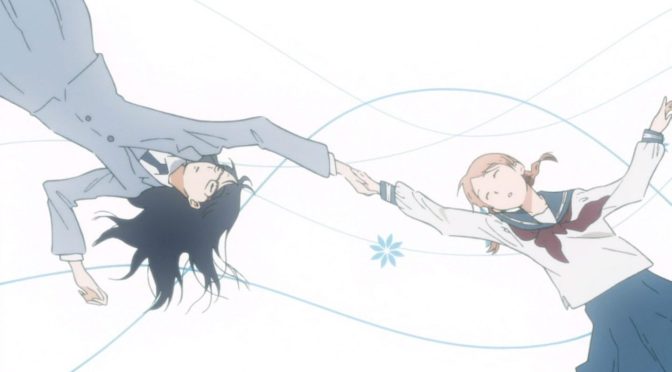 Japanese Title: Aoi Hana (Not to be confused with Ano Hana)

Similar: Maria Watches Over Us

Even with all the above, one still can’t grasp the drivel that is Sweet Blue Flowers. It’s so bad that I wonder how a studio green lit this loathsome rubbish. One look at the script would turn even the most novice of readers into twitching masses of ooze from the sputum this show vomited all over them.

It’s supposed to be about the budding romance and troubled relationships of teenage lesbian girls, yet it is so far from it; oh, you have no idea. The lead characters are supposed to be Fumi the spineless, and her brunette childhood friend, Akira, who is a friendly girl and stands up for others. I say supposed to be because a supporting character, what’s-her-name, girl with short black hair, Mary-Sue… She is in the anime more than Akira and at least as much, if not more so, than Fumi.

Fumi suffers heartbreak when her cousin marries a man. They were in a secret sexual relationship, but this cousin must be at least five years older for her to be getting married – remember, Fumi is about fifteen at this point and we are never told how long ago this relationship started. To get over it, Fumi falls instantly in love with Mary-Sue wench, they break-up after what is supposed to pass for a relationship, and we are now almost done with the show. I can’t spoil anything, for nothing happens! They fall in ‘serious’ love, have empty conversations, looking dead all the while, split for…what amounts to nothing, and act heartbroken. Again, act, because it’s so lifeless and pathetic that I experienced more emotion playing Hearts on the computer while watching this. (Gah, Queen of Spades on second clubs drop!)

Meanwhile, Akira does…nothing. Every girl in two neighbouring all-girls schools (one of them Catholic) turn lesbian for bitchy Mary-Sue wench – I jest you not, she’s a total jackass, even to the girl she ‘loves,’ and still everyone wets their knickers at the sight of her. You are told that she’s oh-so-amazing at everything, but it’s never shown. Even her family, who are high-society, don’t raise a single objection when their daughter announces she’s a lesbian nor do they have a problem with her trying to have an affair with her teacher – of course they don’t care that the teacher and seventeenish-year-old bitchy Mary-Sue trull-wench see each other regularly at school either. Oh yes, she did move away, after rumours started, all the way to – drum-roll please – next door!

We still aren’t done. It’s perfectly normal for fifteen-year-old catholic school girls to be engaged to adult men. What was that? I just made that up? No, even the school acknowledges this. In the advertisement for the school play of the vomit inducing novel Wuthering Heights, it states that the only males who can attend must be family or fiancés of the girls. Nothing is addressed, nothing is questioned; just like the farcical relationships, we see no conflict. No one has a problem with anything, no matter how sordid – especially if it involves bitchy demimondaine Mary-Sue trull-wench.

Look, the problem has nothing to do with them being lesbians. The truth is that no one, not even a lesbian herself, would give no reaction to their daughter being one (never mind the affair with a teacher). It’s out of the norm. You don’t bring in such subject matter without giving the attention and conflict it deserves. It’s pathetic. This reminds me of tokenism, where a minority or gay guy is forced into a plot to give the illusion of being progressive, when in reality it is nothing more than insulting.

So what do they do if not overcome conflict? Nothing, in fact…the dialogue is mere filler on irrelevant rubbish such as the school’s value on height and how it makes you tough, for some reason. (Don’t look at me, I don’t get it either.) Not a single conversation is natural. It’s all so rigid and slow like these girls have trouble understanding a word spoken. The girls cry at the drop of a hat. We have no real characters, little personality and no depth. The most exciting event for them is seeing the school chapel and tearoom.

Voice work is just as stimulating with its monotone drones, sad sack vocals and unnatural speech. Only Akira differs, but is still bland. Most scenes have no music, making the dialogue feel even slower…

Sweet Blue Flowers does not have a gram of potential. In the end, we are left with atrocious characters, no development, nothing redeemable, and let’s not forget, super bitchy demimondaine Mary-Sue trull-wench.

A filter of mist hangs over to give this anime a faded look. While the backgrounds look nice in colour sketch art, they have no movement to them with immobile characters – no nod, no moving mouth in speech, no waver of wind, nothing. Something as simple as a shift in light and shadow on trees when they rustle could have been a huge improvement. Characters don’t even project shadows (a patch the size of your foot doesn’t count).

Music consists of slow piano pieces – a few tracks or many, not sure, since they all sound the same. String instruments occasionally take over, but they don’t add another layer. Dead acting.

What more is there to say?

Recommendation: Not worth your time in the least. Sweet Blue Flowers is eleven episodes too long. Forget I ever mentioned it.