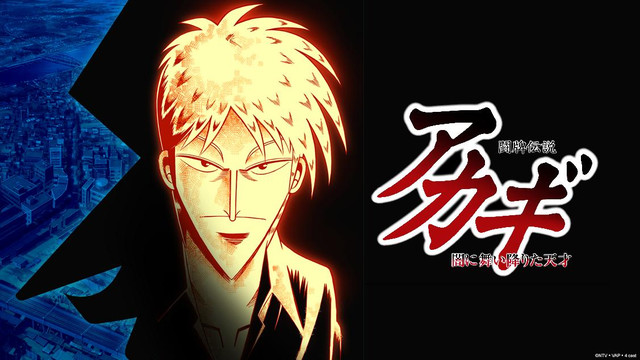 Akagi loves his mahjong like Yugi loves his children’s card games. In fact, the entire underground seems to love mahjong a whole lot. Mahjong is what makes the Yakuza go round; it takes lives, passes around exuberant amounts of money, induces insanity – it is lifeblood.

Mahjong, for the uninitiated, is a Chinese four-player game similar to most card games where the objective is to make pairs or straights of different tiles, only with more suits and pieces. You have a large hand of hidden tiles and the first to have it full of pairs and/or straights, wins the game. The key to the game is being able to read your opponent’s hand based on what they take and throw into the pond (the discard piles in the middle), and their reaction to each play. Think of it as poker, only requiring more skill and the game pieces matter.

Akagi is a thirteen-year-old mahjong prodigy who stumbles into the underground scene of gambling and obsessive mahjong playing – any conflict between gangs in this world is resolved through a round of mahjong. After a spectacular first night of play, Akagi is roped in to play for the Yakuza against various expert players. What makes Akagi stand out from the rest is that he is utterly insane. Not in the sense of a raving lunatic, no, he is fearless, thrilled by risking it all for the game – fingers, limbs and even life are gambling tokens. The more he has on the line, the greater the excitement for him. He’s an interesting character in the way he thinks, strategises and tortures his opponents through mental warfare. My only gripe with him is how he becomes professional. I don’t believe for one moment that he would be a genius at the game after five minutes of having the rules explained. They should have instead lied about him being a novice, in my opinion; it wouldn’t have made a difference to anything outside of that unconvincing origin.

As an anime, Akagi is as dramatic as they get. Every tile drawn, every play, every thought is overdramatized to the nth degree. Everyone does act as though mahjong is the creator and bringer of destruction, the answer to life, the secret to the universe. Is this a good thing? Well, think of what any sport anime would be like if they didn’t pile on the dramatic. It wouldn’t be interesting to watch, now would it? You have to like that intrinsic anime over-the-top style…and mahjong. Each game is narrated through a combination of the players’ and spectators’ thoughts and the recount of a narrator – at times it does slow to a crawl as you have to listen to every passing thought. The last few episodes are most guilty of this. They could have cut about four episodes’ worth of mindless rambling throughout the show.

Ninety-five percent of the screen time passes either playing or talking about the game. And that’s where Akagi’s major flaw lies. Normally, in a sport anime, plotlines surrounding the main narrative, therefore even if the sport isn’t your cup of tea, the overall package can hold your interest. Here, it’s nothing but mahjong, so you better love it. Yes, there are other interesting characters, most notably the opponents, ranging from the manic to the blind – each competes to see who is the most dramatic. I swear to you, winning is second to being dramatic. The strategies of each are interesting and varied, with different conditions versus each new opponent. I especially like how cheating is a part of the game, another tool for the utility belt.

Unfortunately, you will cringe in disbelief at times when luck of the draw attains a win. While it is true that luck is a part of any game in real life, here they claim that the luck was created or even ‘destined.’ It doesn’t happen often, but enough for you to notice. On the flip side, chance-heavy wins are illustrated well – i.e. it goes into the habits and psychology of characters to explain everything, even which of two pieces they would discard based on the sort of person they are.

Akagi is a good anime; however, I can only recommend it to those who enjoy and understand mahjong.

The art will garner widely conflicting opinions; you will either love it or hate it – somewhere in between is improbable. Akagi looks like a woodpecker with that nose of his, the style angular and unique.

The music is good, adding to the tension and drama, and rather surprisingly, the opening theme isn’t too bad. Avoid the ending theme, however.

Limited to mahjong matches, each one with higher stakes than the last, yet good with what it encompasses.

Recommendation: A must watch for the lovers of mahjong and insane competition. Though I rate Akagi highly, I expect this anime to be of niche interest.