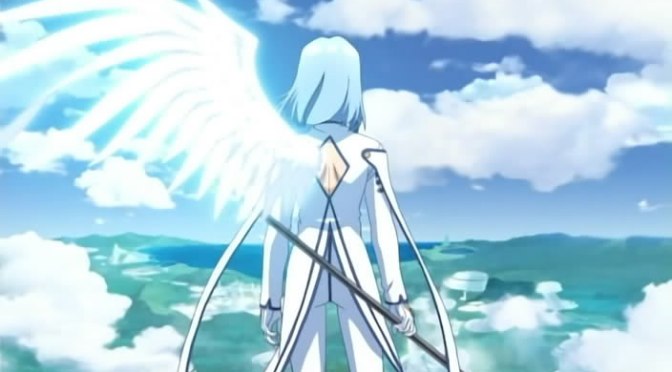 Ah! My Goddess: The Movie

Fighting Wings is a two-episode special of the celebrated Ah! My Goddess series. It fits in somewhere after the second season, though there isn’t a direct link between the stories beyond the general premise of the show: university student Keiichi accidentally called the Goddess Hotline, summoning the goddess Belldandy, who has been his girlfriend since.

For those wanting this special to further the main plot, you will be disappointed as this focuses instead on side character, Lind a Valkyrie warrior goddess, who made a few appearances in earlier shows. When a phantom known as the Angel Eater goes on a rampage in Yggdrassil (heaven), Lind descends to Earth, the next target, where Keiichi and the goddesses reside. The plot moves at an improved pace from the second season, and sports a good amount of action with cool magic enhanced by the clean and beautiful art you can expect from the Ah! My Goddess series. The symbiotic angels of the goddesses are of particular beauty. If only the new angels didn’t have names like Cool Mint (spoken in poor English by the Japanese voice actors).

Cheesiness is Fighting Wings’s biggest flaw. With humour thrown into the middle of serious scenes, it makes you wonder if comedy wasn’t an afterthought once they realised that there was going to be none in this romantic comedy. To exacerbate matters, the humour isn’t a success, falling far short of the main series.

The turnabout for the heroines is also rather lame, far too convenient without much of a struggle or conflict. Suffering in a similar manner is the side plot of Skuld, the youngest goddess, unable to summon her angel, resolved with zero effort. With a lack of resolution against the villainy, I was unsatisfied and questioned why they bothered. Don’t misunderstand, I didn’t hate these episodes – Lind’s story has closure at least – they are merely disappointing. Yes, the voice acting is good with the regular voices from the series, and the music matches the Celtic and Nordic tunes of norm, but none of these live up to the equivalent in the first season, and more particularly, the movie.

It has left me with one positive though; I do want to see more of Lind’s story and hope she does make a return in future.

Recommendation: For fans of Ah! My Goddess only. You aren’t missing out on much if you choose to skip Fighting Wings.